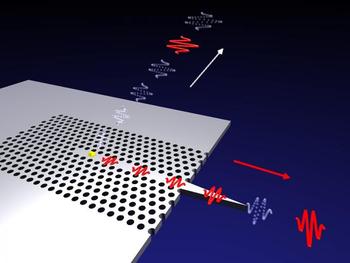 This is an illustration of a photon gun. A quantum dot (the yellow symbol) emits one photon (red wave packet) at a time. The quantum dot is embedded in a photonic crystal structure, which is obtained by etching holes (black circles) in a semiconductor material. Due to the holes, the photons cannot be emitted in all directions, but only along the waveguide, which is formed by omitting a number of holes. 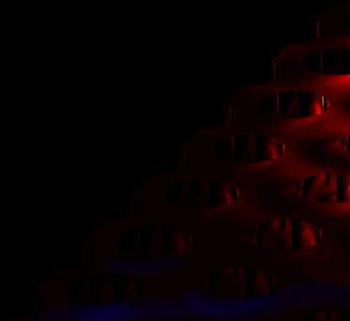 Professor Peter Lodahl in the Quantum Optics Laboratory at the Niels Bohr Institute in Copenhagen.

Advanced photonic nanostructures are well on their way to revolutionising quantum technology for quantum networks based on light. Researchers from the Niels Bohr Institute have now developed the first building blocks needed to construct complex quantum photonic circuits for quantum networks. This rapid development in quantum networks is highlighted in an article in the prestigious scientific journal, Nature.

Quantum technology based on light (photons) is called quantum photonics, while electronics is based on electrons. Photons (light particles) and electrons behave differently at the quantum level. A quantum entity is the smallest unit in the microscopic world. For example, photons are the fundamental constituent of light and electrons of electric current. Electrons are so-called fermions and can easily be isolated to conduct current one electron at a time. In contrast photons are bosons, which prefer to bunch together. But since information for quantum communication based on photonics is encoded in a single photon, it is necessary to emit and send them one at a time.

Information based on photons has great advantages; photons interact only very weakly with the environment - unlike electrons, so photons do not lose much energy along the way and can therefore be sent over long distances. Photons are therefore very well suited for carrying and distributing information and a quantum network based on photons will be able to encode much more information than is possible with current computer technology and the information could not be intercepted en route.

Many research groups around the world are working intensively in this research field, which is developing rapidly and in fact the first commercial quantum photonics products are starting to be manufactured.

Control of the photons

A prerequisite for quantum networks is the ability to create a stream of single photons on demand and the researchers at the Niels Bohr Institute succeeded in doing exactly that.

Illuminating the quantum dot with laser light excites an electron, which can then jump from one orbit to another and thereby emit a single photon at a time. Photons are usually emitted in all directions, but the photonic chip is designed so that all the photons are sent out through a photonic waveguide," explains Peter Lodahl, professor and head of the Quantum Photonics research group at the Niels Bohr Institute, University of Copenhagen.

In a long, laborious process, the research group further developed and tested the photonic chip until it achieved extreme efficiency and Peter Lodahl explains that it was particularly surprising that they could get the photon emission to occur in a way that was not previously thought possible. Normally, the photons are transmitted in both directions in the photonic waveguide, but in their custom-made photonic chip they could break this symmetry and get the quantum dot to differentiate between emitting a photon right or left, that means emit directional photons. This means full control over the photons and the researchers are beginning to explore how to construct complete quantum network systems based on the new discovery.

"The photons can be sent over long distances via optical fibres, where they whiz through the fibres with very little loss. You could potentially build a network where the photons connect small quantum systems, which are then linked together into a quantum network - a quantum internet," explains Peter Lodahl.

He adds that while the first basic functionalities are already a reality, the great challenge is now to expand them to large, complex quantum networks.