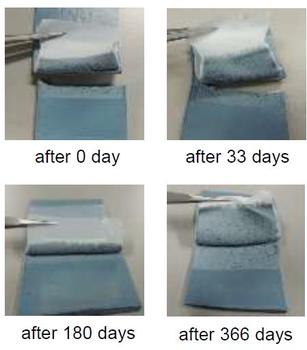 Polytetrafluoroethylene (PTFE) is used in a variety of daily products, from cookware to carpets, because of its non-sticky property. However, this very same non-stickiness has limited its application to other fields including medicine. Scientists at the Osaka University Graduate School of Engineering in collaboration with Hyogo Prefectural Institute of Technology have reported how heat-assisted plasma treatment can modify PTFE to solve this problem

Kazuya Yamamura, associate professor and Yuji Ohkubo, assistant professor at Osaka University, who first authored the study, note a need for better lubricants in medical procedures. Many people do not give it much thought, but "the rubber in syringes has to be stable and non-sticky to give accurate amounts of a medical agent," Ohkubo said.

In current procedures, the rubber is normally lubricated with a coating such as silicon oil, but this coating can contaminate the agent. PTFE would be an ideal lubricant because it would not mix with the agent, but to be effective it must also adhere to the rubber.

To increase the adhesiveness, scientists will treat PTFE with either corrosive sodium-based compounds or plasma. Plasma treatment is safe, but the adhesion is inferior.

"Conventional plasma treatment leaves a weak boundary layer (WBL) on the plasma-treated PTFE. This WBL weakens the adhesion between PTFE and the rubbe," Yamamura explains.

Determined to make a safe PTFE-based adhesive, Ohkubo considered the pressure and temperature under which the plasma treatment was done.

Suitable conditions for increasing adhesion were the result of new chemical bonds and etching of a WBL on the PTFE surface. "Carbon-fluoride bonds were exchanged with carbon-carbon crosslinks" as the plasma power was increased, said Katsuyoshi Endo, professor, who managed the study. These crosslinks and etching recovered the WBL, strengthening the adhesion between PTFE and rubber.

Further investigation showed that the increase in crosslinks was a result of the higher PTFE surface temperature that came with plasma treatment at higher power. To maximize these crosslinks, the scientists decided to heat the PTFE to several hundred degrees Celsius before plasma treatment.

"The surface of PTFE sheet generally has a WBL containing many scratches and pits ", which could affect the adhesion, explained Ohkubo. The heat-assisted plasma treatment improved the adhesion property by recovering the WBL.

The impact of the heat and power on the adhesion was very clear. At lower plasma power, peel tests showed that the PTFE could be easily split from the rubber. However, at higher power, the adhesion was so strong that the rubber tore apart instead of separating from PTFE. Moreover, this effect was seen one year after the treatment, demonstrating the stability of the adhesion.

That this strong adhesion could be achieved without any toxic chemicals suggests the already large use of PTFE could be further expanded. "Our method is straightforward and could increase the number of medical applications," said Ohkubo. The heat-assisted plasma treatment should also be useful for enhancing the adhesion of other materials.