A computational method for designing a new type of 2D carbons 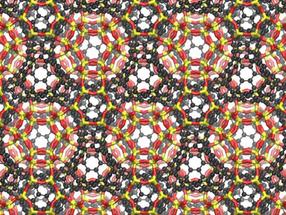 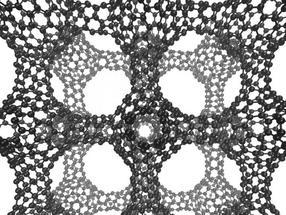 An example of the pure carbon surface, which shows the Schwarz P minimal surface as templated by a hypothetical zeolite.

Zeolites are porous minerals that occur both naturally but also are being synthesized artificially. Because of their stability and durability, they are used in industrial water purification, catalysis, adsorption, and even in blood-clotting powders (e.g. QuickClot used by the US military).

A recent application of zeolites is to use them as templates for "growing" carbon surfaces inside the pores of zeolites. Now, the lab of Berend Smit at EPFL Sion, working with their colleagues at University of California Berkeley, have developed a computational method to grow these carbon surfaces.

To the surprise of the authors a detailed analysis of these carbon structures resembles negatively curved surfaces called Schwarzites. "For a long time Schwarzites have been only a mathematical concept of a new form of two-dimensional carbon," says Berend Smit. "Like graphene, they have potentially many unique properties and interesting applications." The unique electronic, magnetic, and optical properties of Schwarzites make them ideal for supercapacitors, battery electrodes, catalysis, gas storage, and chemical separations.

"Our work allowed us to generate a library of Schwarzites that can be obtained from all known zeolite structures," says Smit. "We can now suggest to experimental groups which zeolite to use as a template for making a new two-dimensional carbon, described by a particular Schwarzite."