The most exotic fluid has an unexpectedly low viscosity 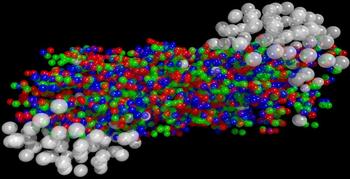 Quark-gluon plasma in the LHC is produced as a result of collisions of lead nuclei (in white) approaching along one direction at velocities close to the speed of light. The fluid formed by quarks and gluons (in red, green and blue) initially moves along the direction of the beam. Anisotropic hydrodynamics, presented by researchers from the Institute of Nuclear Physics Polish Academy of Sciences in Cracow, Poland, is currently the most accurate description of the phenomena occurring in quark-gluon plasma. (Source: CERN/Henning Weber)

Collisions of lead nuclei in the Large Hadron Collider (LHC) particle accelerator take place at such great energies that quarks that are normally confined inside nucleons are released and, together with the gluons that hold them together, form a stream of particularly exotic fluid: quark-gluon plasma. A new, more detailed theoretical model for this plasma, presented by a group of physicists from Poland and the USA, predicts that it has a much lower viscosity than previously estimated.

Our everyday world consists of structures built mainly of protons and neutrons, particles each containing three quarks held together by strong interactions conveyed by carriers called gluons. In contrast to gravity, which acts more weakly the further away from each other the masses are, strong interactions increase with greater distance. That's why quarks behave as if they were tied together with springs - the more we try to pull them apart, the harder they try to stay close to one another. However, the energies of particles accelerated inside the LHC are so high that, during collisions, quarks are released from protons. For a short while, quark-gluon plasma is then produced, without the slightest doubt the most exotic fluid examined in laboratories on our planet. Up to now, it had seemed that it was quite viscous. A different conclusion is arrived at from the deliberations and analyses of researchers from the Institute of Nuclear Physics Polish Academy of Sciences (IFJ PAN) in Cracow and Kent State University in Kent (Ohio, USA).

"In physics, flows are described using hydrodynamic equations. When apllying the simplest versions of these to quark-gluon plasma evolution, the predictions are quite consistent with LHC collision measurements. At first glance, the quark and gluon soup really does seem to behave according to simple expectations. However, when we start to look closely, it rapidly becomes evident that we are dealing with a very complex phenomenon," says Dr. Radoslaw Ryblewski (IFJ PAN).

The mathematical description of fluid becomes simplest assuming that the fluid is perfect, i.e. devoid of viscosity. Since there are no perfect fluids in nature, various corrections are introduced to improve the accuracy of hydrodynamic equations. However, the resulting variants of viscous fluid hydrodynamics are based on further assumptions, for example, that pressures in fluid change the same way in all directions.

"The problem is that quark-gluon plasma in the LHC is produced in a very specific way, as a result of collisions of lead nuclei approaching along one direction at velocities close to the speed of light. As a result, the fluid formed by quarks and gluons initially moves along the direction of the beam, and only then does it begin to cool down and dilute in all directions," explains Dr. Ryblewski. "When creating a model, the scale of the challenge increases even more when we try to take into account the fact that at the beginning of the process we have a different fluid than at the end - since after cooling, the quarks gradually begin to stick together again! So, together with Prof. Wojciech Florkowski, we began at our institute to develop a more detailed model of the phenomenon: anisotropic hydrodynamics, built on the assumption that the described system does not behave in the same manner in all directions."

The latest theoretical model, constructed on the basis of anisotropic hydrodynamics, has just been presented. One of its most interesting conclusions concerns the viscosity of quark-gluon plasma (we are talking here about volume viscosity which should not be confused with shear viscosity between the layers of flowing fluid). This viscosity turned out to be six times less than the numerical predictions of other models based on the hydrodynamics of viscous fluid.

The equations presented by the Cracow-based physicists have an important advantage: in contrast to the previous ones, for certain cases they can be solved with practically any level of accuracy. By combining their predictions with data from other models and repeatedly confronting them with actual measurements in the ALICE experiment at the LHC, the Polish-American team has managed to show that anisotropic hydrodynamics is currently the most accurate description of the phenomena occurring in quark-gluon plasma.

The Henryk Niewodniczanski Institute of Nuclear Physics (IFJ PAN) is currently the largest research institute of the Polish Academy of Sciences. The broad range of studies and activities of IFJ PAN includes basic and applied research, ranging from particle physics and astrophysics, through hadron physics, high-, medium-, and low-energy nuclear physics, condensed matter physics (including materials engineering), to various applications of methods of nuclear physics in interdisciplinary research, covering medical physics, dosimetry, radiation and environmental biology, environmental protection, and other related disciplines. The average yearly yield of the IFJ PAN encompasses more than 600 scientific papers in the Journal Citation Reports published by the Thomson Reuters. The part of the Institute is the Cyclotron Centre Bronowice (CCB) which is an infrastructure, unique in Central Europe, to serve as a clinical and research centre in the area of medical and nuclear physics. IFJ PAN is a member of the Marian Smoluchowski Krakow Research Consortium: "Matter-Energy-Future" which possesses the status of a Leading National Research Centre (KNOW) in physics for the years 2012-2017. The Institute is of A+ Category (leading level in Poland) in the field of sciences and engineering.