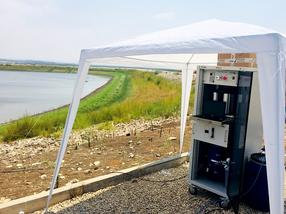 HPNow generator: The HPNow technology solution enables low concentration H2O2 production on demand, directly at the intended point of use, and using only electricity, water and air as feedstock. The system is based on a modular generator in which a proprietary electrocatalytic cell is used to produce hydrogen peroxide from water and oxygen in a single step. The picture show trials in Israel.

Evonik has invested in the startup HPNow ApS through its venture capital unit and now holds a minority stake in the company, which is headquartered in Copenhagen (Denmark). HPNow has developed a technology for producing hydrogen peroxide (H2O2) in a fully automatic system using water, air, and an electric current. The transaction took place in the context of a Series A round of financing. The parties have agreed not to disclose the amount of the investment. Evonik will be represented by a seat on the company’s supervisory board. “HPNow can facilitate a breakthrough in the electrochemical production of hydrogen peroxide,” says Bernhard Mohr, head of Venture Capital at Evonik. “Evonik possesses a great deal of expertise and extensive experience in the hydrogen peroxide business, so we’re an ideal match for HPNow.”

With an annual capacity of more than 950,000 metric tons and 13 production plants, Evonik is one of the world’s largest producers of hydrogen peroxide. The HPNow technology solution enables low concentration H2O2 production on demand, directly at the intended point of use, and using only electricity, water and air as feedstock. The system is based on a modular generator in which a proprietary electrocatalytic cell is used to produce hydrogen peroxide from water and oxygen in a single step. “This patented technology offers the possibility of cost-efficient provision of hydrogen peroxide as needed, directly at the customer’s point of use,” says Michael Träxler, head of Evonik’s Active Oxygens Business Line. “The investment supports our strategy of supplying our customers with tailored system solutions.”

HPNow’s technology will permit the use of H2O2 in applications where transport and storage issues have so far restricted the use of the material, for example in various areas of agriculture. HPNow plans to use the capital to further scale up and commercialize its technology. “In Evonik we’ve gained a strategic investor with extensive experience in innovative technologies connected with hydrogen peroxide as well as expertise in tapping new markets,” says Ziv Gottesfeld, co-founder and CEO of HPNow. “We very much look forward to working with them in bringing our on-site hydrogen peroxide generation solutions to new markets and customers.”

As part of its venture capital activities, Evonik plans to invest a total of €100 million in promising start-ups with innovative technologies and in leading specialized venture capital funds. Regional focus is Europe, North America and Asia. Evonik currently holds stakes in more than twenty startups and specialized funds.