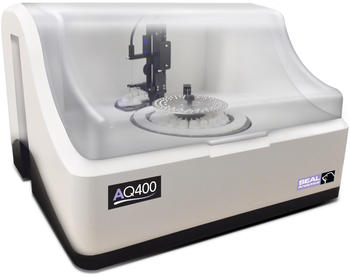 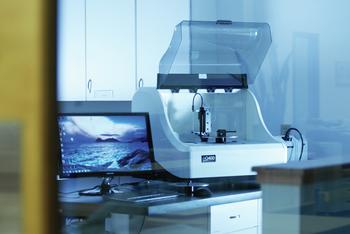 Laboratories analysing environmental samples face many hurdles. The lab’s task is made significantly more difficult by the large number of samples and analytes required. Sometimes the samples to be analysed number in the thousands per day and keeping the costs per sample contained and low, places extra pressure on the laboratory.

Thankfully there is a way to process a large number of environmental samples automatically, with a low cost per sample. The SEAL AQ400 Discrete Analyser uses the principles of discrete analysis, and employs a robotic sampling arm to aspirate, dispense and mix accurate and precise quantities of samples and reagent with no cross-contamination. True walk-away operation means you can be performing analysis even when your lab is unattended overnight.

SEAL chemists have designed an automated analyser that gives everything an environmental lab needs in one compact instrument. Like other Discrete Analysers in the SEAL range, the AQ400 will give you the best analysis and performance while eliminating problems inherent in analysers designed for clinical use. The AQ400 is the fastest and best value discrete analyser on the market with:

Effective mixing of Samples and Reagents- mixing of samples and reagents is critical, however in some analysers it is not very effective, which means the results are not reproducible. Instead, the AQ400 approximates mixing in a flask by repeatedly “sucking and spitting” samples and reagents, rather than simply stirring. The SEAL approach is the most effective way to mix, and it also limits moving parts.

No Cross Contamination- with Discrete Analysers using the same probe to pick up samples and reagents and flicking droplets over the system, the cross contamination of cells is a real possibility. The AQ400 completely negates cross contamination opportunities by being the only discrete analyser with 3 wash stations, including flushing of the probe (on the outside before it moves anywhere) and a fixed wash pot that is continually filled with fresh DI water. This means the AQ400 is the only Discrete system that can run nitrate & ammonia together with no cross contamination (as nitrate uses NH4CI buffer).

Only Optically Pure Cuvettes- many Discrete Analysers use styrene reaction wells from which measurement is taken. These are not only more expensive (increasing the cost per test), they scratch easily and are not optically pure, leading to reproducibility issues. The AQ400 uses low cost, disposable reaction wells and measurement is performed in an EPA recommended 100% optically pure and inert glass cuvette.