The Chemistry of Cider 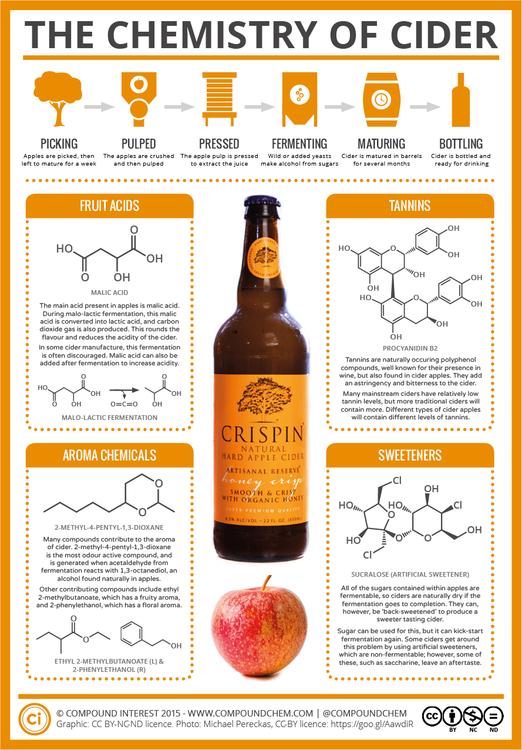 The Chemistry of Cider

Having looked at the chemistry behind beer previously, it seemed only fair to also take a look at cider for all the cider drinkers out there. On a hot summer’s day, the cool, refreshing taste of cider is hard to beat. But what are the chemicals behind this flavour?

Before we look at the chemistry, let’s briefly discuss how cider is made. Obviously, it starts with the apples being picked from the tree. The type of apples is, of course, a major factor in the taste of the finished cider. Bittersweet cider apples are low on acidity, but high on tannins, whilst sharp apples are the opposite. Sweet apples, meanwhile, are low in both departments, whilst bittersharp apples are high in both.

Once the apples have been picked, they’re left to mature for a time before then being scratted, or ground down, into a pulp. The pulp produced by this process is known as pomace. This pomace is then pressed to squeeze out all of the juice, which is collected into either vats or casks. At this point, it is then slowly fermented, and yeasts convert the natural sugars in the apples into alcohol. These yeasts can be the natural yeasts present in the apples, or yeasts that are added specifically for fermentation.

After fermentation is complete, the cider will often be left to mature for several months. At this point, extra sugar is sometimes added to the cider to allow fermentation to continue, and produce a small amount of carbon dioxide to carbonate the cider. However, commercially carbonation is often primarily accomplished via direct injection of carbon dioxide. In the manufacture of some ciders, they may be blended with other, older ciders, to ensure consistency of taste or to alter the flavour.

Carbon dioxide can also be produced by one of the acids present in apples. Malic acid is the main acid in apples, and a process called malo-lactic fermentation converts it into lactic acid. You’ve probably heard of lactic acid before – it’s also the acid produced by anaerobic respiration, the process our body resorts to to supply our muscles with extra energy when it can’t get enough from aerobic respiration alone. When you get a stitch, lactic acid in your muscle tissue is to blame.

In cider, the conversion of malic acid into lactic acid lowers the overall acidity of cider, and leads to a rounder flavour. Depending on the cider in question, this process can be desirable or undesirable. Some cider manufacturers will add extra malic acid after fermentation has completed in order to increase acidity and modify the flavour.

Another class of compounds which can influence the taste of a cider are the tannins. We’re more acquainted with the idea of tannins being present in red wine, but they’re also found in apples, and by extension, ciders. Chemically, they’re polyphenols – these are formed from phenolic compounds, such as epicatechin, chained together. In terms of taste, they contribute a bitterness and astringency. Whilst their levels are higher in traditional ciders, they’re still present in lower quantities in mainstream ciders.

Sweetness is also an important factor, particularly in popular ciders. However, if fermentation is allowed to go to completion, all of the sugars contained in apples are fermentable, so the result is a dry cider. In order to achieve sweetness, either the fermentation must be stopped before completion, or a sweetening substance must be added afterwards.

Stopping the fermentation prematurely, a process known as ‘keeving’, is less common. Instead, sugar can be added. The problem with sugar, being fermentable, is that it can kick-start fermentation again. Commercially, this problem is often circumvented by filtering and pasteurising the cider to remove any remaining yeast, preventing further fermentation from occurring. On a small scale, this is harder to achieve; manufacturers can either wait several months after fermentation, to ensure the yeast is dead before adding sugar, or resort to other methods. The main alternative to sugar for sweetening is non-fermentable artificial sweeteners. Saccharin has been used in some ciders, but has an noticeable aftertaste. Instead sucralose is now an oft-used alternative.

So, we’ve covered a number of the compounds contributing to the flavour of cider, but what about the aroma? Of course, the two are closely related, and ester compounds in the cider will contribute to both. These tend to have fruity flavours; ethyl-2-methyl butanoate is a particularly prominent fruity ester in ciders. The compound suggested as one of the main contributors to the aroma of cider is 2-methyl-4-pentyl-1,3-dioxane; it’s thought that this compound is produced when acetaldehyde, generated as a byproduct of fermentation, reacts with 1,3-octanediol, an alcohol naturally present in apples.

Of course, we’ve barely scratched the surface of the huge number of compounds present in ciders here, but the next time you’re enjoying a cider, be it one of the commercial or the more traditional variety, you can reflect on the medley of chemical compounds necessary to produce its distinctive flavour. There are also plenty of links below to delve deeper into the chemistry of cider and cider making!