Charge order and electron localization in a molecule-based solid 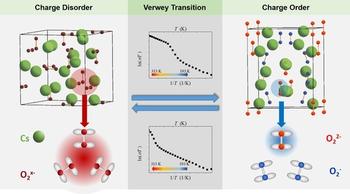 Illustration of the Verwey-type charge ordering transition in Cs4O6. The charge disordered crystal structure (left) where all negatively charged oxygen molecules are equivalent is transformed into the charge ordered structure (right) with distinct singly charged O2- and doubly charged O2(2-) ions. The transition is accompanied by a drastic drop or increase in the electrical conductivity (inverse of resistivity) σ on cooling or heating, respectively. The change in conductivity, shown here on a logarithmic scale, reveals a hysteresis.

Charge ordering in cationic mixed-valence compounds is of crucial importance for materials science. The prototypic example for a transition from a charge-disordered to a charge-ordered state has been magnetite, Fe3O4, where Evert Verwey observed a sudden jump in resistivity near -150°C. In the journal Science Advances now a research team of scientists from Germany and Slovenia reports a Verwey-type charge-ordering transition in a different class of mixed-valence compounds that is composed of negatively charged dioxygen molecules.

Charge ordering in mixed-valence compounds, which usually contain positively charged cations in more than one formal charge state, is of crucial importance for materials science. Many functional properties of materials like magnetism, magnetoresistance, ionic conductivity and superconductivity are found in mixed valence compounds. One of the very first attempts to understand the mechanism of a charge ordering transition dates back to 1939 when Evert Verwey, a Dutch chemist, observed a sudden jump in resistivity in the prototypic mixed valence compound magnetite, Fe3O4, near -150°C. He proposed that in the nearly metallic state of Fe3O4 at temperatures higher than -150°C, certain iron atoms are indistinguishable in the crystal lattice due to a full delocalization of charges. However, below this temperature a semiconducting state with a complex ordering pattern of charges over the available iron sites was established. In general, a transition from a charge-disordered into a charge-ordered state which is accompanied by a jump in electrical resistivity is nowadays called Verwey transition.

In the journal Science Advances now a research team of scientists from Germany and Slovenia reports a Verwey-type transition in a completely different class of mixed-valence compounds which is composed of negatively charged dioxygen molecules. The cesium compound Cs4O6 undergoes a phase transition from a state with indistinguishable molecular O2x- entities to a state with well- defined singly charged superoxide O2- and doubly charged peroxide O22- anions, which is accompanied by a corresponding change in charge transport dynamics. These results are supposed to shed new light on the mechanism of Verwey-type charge ordering phenomena.

“The Verwey-type transition in the cesium oxide Cs4O6 is conceptually more simple than the original one in Fe3O4” states Peter Adler, the first author of the study. Whereas in Fe3O4 the charge order state is complex and it is difficult to identify individual charge states the situation is more unambiguous in Cs4O6 as the molecular entities in the charge ordered state reveal the typical structural and magnetic features of the constituting paramagnetic superoxide and diamagnetic peroxide units. The authors have established the properties of Cs4O6 by using several experimental techniques, namely neutron diffraction for the study of the crystal structure as well several spectroscopic techniques for verifying a charge localization transition which is a typical hallmark for Verwey-type charge ordering processes. By contrast to Fe3O4 the present compound Cs4O6 remains magnetically disordered down to a temperature of -271°C which is only two degrees above the absolute zero point and it is much less conducting than Fe3O4. The molecular nature of the basic building units and the peculiar features of Cs4O6 should be favorable for disentangling the complex interplay of the charge, spin, and lattice contributions to Verwey-type charge ordering phenomena. The intertwining of the different degrees of freedom may in the future even be used to control new materials functionalities through the Verwey transition.

Contemporary examples for functional materials properties related to mixed-valence are high-temperature superconductivity in copper oxide-based superconductors where the superconducting state competes with a magnetic and charge order state or very large (“colossal”) magnetoresistance effects in certain manganese oxides which occur in the vicinity of a transition from a delocalized to a more localized mixed-valence state. Accordingly, unravelling the mechanism of charge ordering processes in mixed-valence compounds is an important subject in materials science. The breakthrough of the present study is the observation of such charge ordering in a relatively simple crystal structure where novel physical phenomena is expected to emerge from intertwining of degrees of freedom pertinent to the well-defined electronically active oxygen molecular units.

The work was partly performed within the project LEMSUPER (Light Element Molecular Superconductivity) which was supported by the EU Seventh Framework Programme (FP7). Further on, the work was supported by the Slovenian Research Agency. The research involved cooperation of several institutions in Germany and Slovenia, namely the Max Planck institutes for Chemical Physics of Solids in Dresden and for Solid State Research in Stuttgart, the Helmholtz Centre for Materials and Energy in Berlin, the Justus-Liebig University in Giessen, the Jožef Stefan Institute in Ljubljana and the University of Ljubljana.