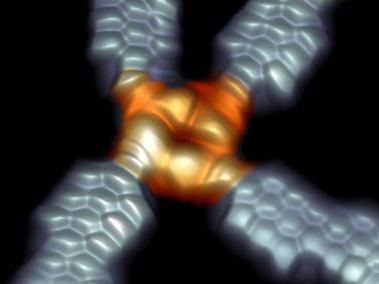 A single molecule can behave as the smallest electronic component of an electronic system. With this premise in mind, researchers in the field of molecular electronics have endeavoured in the last years to develop new approaches that bring closer the long-awaited objective of using molecules as electronic logic components.

And one of the most recent steps forward is a result of a new collaboration between physicists from CIC nanoGUNE, Donostia International Physics Center (DIPC) and Materials Physics Center (CFM, CSIC-UPV/EHU) and synthetic chemists from CiQUS (Center for Research on Biological Chemistry and Molecular Materials at the University of Santiago de Compostela). A breakthrough that has allowed contacting a single-molecule magnetic device for the first time.

"The idea is fascinating: to store information into a single molecule and read it", says Nacho Pascual, Ikerbasque Professor and leader of the Nanoimaging Group at nanoGUNE. "We have known for long time how to make the molecules, but we could never wire them into a circuit until now", he confides. To achieve this goal, scientists developed graphene narrow stripes with the aim of using them as electrical wires; in addition, they also designed a method to precisely contact the molecule at predefined places.

"We found that the contact to the molecule crucially affects how the molecular device behaves", says Jingcheng Li, first author of the article. "This discovery has made us direct the contacting step with atomic precision technologies".

Regarding the molecule creation process, researchers have employed in this case a chemical method based on guided chemical reactions over a metallic surface. "The creation of the molecular device is simple", explains CiQUS team leader, Diego Peña: "we designed and synthetized the building blocks with 'glue-like' chemical terminations at the points where contacts are to be created; from then on, nature does the rest of the job for us", he jokes.

To illustrate the process, this group of scientists has given a very visual metaphor: "we can see it as a molecular LEGO", they said. In words of Dr. Pascual, "we are learning how to use nature's laws for assembling molecules into more complex nanostructures", he claims.

The authors demonstrated the working function of the molecular device using Scanning Tunneling Microscopy (STM), a very advanced method to visualize atoms and molecules, and to measure their behavior. By means of this tool, they could confirm under which conditions the magnetic information stored in the molecule could survive to the contact, opening a new way to develop novel materials for efficient electronics.