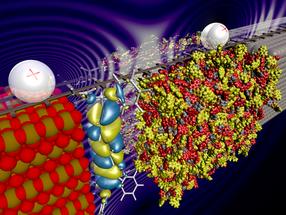 Visualization of a current through an OLED, flowing via a thin molecular layer (center) from an electrode (left) to an organic semiconductor (right).

Scientists at the Max Planck Institute for Polymer Research in Mainz, Germany, have received an unexpected result: They have discovered a new method to improve contacts in OLEDs. This new approach leads to a higher energy efficiency and can be used in almost any organic semiconductor element.

Organic light-emitting diodes (OLEDs) are used as light sources in high-quality smartphone displays and large-area high-end products such as OLED televisions. The main active component in an OLED is a light-emitting layer of an organic semiconductor, which converts electrical energy into visible light. In an OLED, the organic semiconducting layer is situated between two electrodes; by applying a voltage across these two electrodes, an electric current passes through the OLED, which is converted into visible light.

However, for many organic semiconductors, especially for blue- or ultraviolet-emitting materials, it is difficult to inject the current from the positive electrode into the OLED. This leads to low efficiencies in OLEDs.

Improving electrical contact with an ultrathin interlayer greatly increases the efficiency of ultraviolet-emitting OLEDs. The scientists at the MPI for Polymer Research have demonstrated this improvement of electrodes for a large number of organic semiconductors and for different spacer layers. Professor Paul Blom, Director at the Max Planck Institute for Polymer Research and head of its Molecular Electronics Department, is convinced: “This simple method of covering electrodes in OLEDs with an ultrathin layer for current-injection improvement is a resounding success for technical application in high-end electronics.”

Gert-Jan Wetzelaer and his research team are very confident that this new approach for fabricating improved contacts can be used in basically any organic-semiconductor device, which could boost their performance now.