When superconductivity disappears in the core of a quantum tube 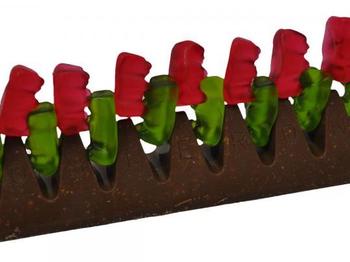 In a one-dimensional periodic potential, represented here by a Toblerone bar, there is no flow of electrons (represented by Gummy bears) when two of them occupy a hollow space. The research made it possible to observe similar behaviour with ultra-cold lithium-6 atoms.

Predicting the behaviour of electrons in a material is not easily done. Physicists from the University of Geneva (UNIGE), ETH Zurich and EPFL replaced the electrons with ultra-cold neutral lithium atoms that they had circulated in a one-dimensional quantum tube. The scientists were then able to confirm an unusual state of matter that retains its insulation regardless of the level of attraction between the particles. This work, published in PRX, opens the way to the search for new materials with atypical properties.

The fact that a material is a metal or an insulator depends on a series of microscopic details, such as the strength of the interactions between electrons; the presence of impurities or obstacles; or the number of dimensions through which the charge carriers can propagate. This high degree of complexity means that predicting the electronic properties of a given material is a hard task. Even if we know perfectly how to model the trajectory of a particle in a vacuum, we struggle to do the same thing in a material (a crystal for example), where the electrons circulate between the nuclei of positively-charged atoms. The latter generate a periodic potential, much like a series of peaks that affect the motion of the electrons, thereby complicating predictions. Will the material be a metal? An insulator? Or a semiconductor? It will all depend on two parameters: the strength of the interaction between the electrons and the strength of the periodic potential. The answer to these questions was found in the ongoing discussions and debates between a group of theorists, led by Thierry Giamarchi, professor in the Department of Quantum Matter Physics (physics section) in UNIGE's Faculty of Sciences, and the experimental groups based in Zurich and Lausanne, led by Martin Lebrat, from the group headed by Professor Tilman Esslinger at ETH Zurich's Institute for Quantum Electronics; and by Jean-Philippe Brantut, professor at EPFL.

The coldest place in the Universe

The researchers tackled the problem by conducting their experiments on a perfectly clean artificial material, meaning they could control the interaction and the periodic potential. Instead of circulating electrons whose long-range interactions make predictions more difficult, the scientists used ultra-cold neutral lithium-6 atoms, which they stored using a laser in two borderless tanks, veritable &laquobowls of light». As Thierry Giamarchi explains: &laquoThe core of this experiment is the coldest place in the universe. The temperature there only reaches 70 billionths of a degree above absolute zero, which is much lower than in an interstellar vacuum.»

The atomic reservoirs were then connected by a one-dimensional quantum tube, in which a second laser was employed to simulate the &laquopeaks» of the periodic potential. The researchers were able to measure the conductivity of the tube while varying the relevant parameters, including the length and height of the periodic potential together with the interactions between the particles passing through it. The scientists highlighted an unusual state of matter, predicted by the theory but which no one had been able to observe until then: a band insulator that is maintained regardless of the strength of the attractive interaction between the particles. The intuitive conclusion was that the greater the attraction between the particles, the more likely it was that the material would be a conductor or superconductor. &laquoIt's true,» continues Professor Giamarchi, &laquoin a three-dimensional world but in the low-dimensional quantum world, it's an urban legend. When you manage to confine the material in a one-dimensional quantum tube with a periodic potential, it remains insulating, even if there is an infinite attraction.» The huge flexibility resulting from this research paves the way for creating complex structures. &laquoWe can see this system as a kind of simulator that will define the ingredients to be used to devise a material that does not yet exist, and that could meet the requirements for future electronic systems - in quantum computers, for example» says Giamarchi.