Flow probes from the 3D printer 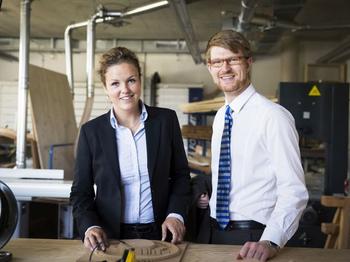 After completing her mechanical engineering studies at the Technical University of Munich (TUM) Katharina Kreitz was virtually flooded with job offers from renowned companies. But instead of accepting one she decided to found her own company for developing precise and individual flow probes, which are used among other things in Formula 1 racing.

Katharina Kreitz came up with the idea of founding her own company as the result of dissatisfaction: During her studies, which focused on aeronautics and space technologies, she frequently worked with flow measurements. "I was constantly irritated by the technology of the conventional flow sensors available in the market," she recalls, adding that it "simply wasn't good enough". Kreitz decided to solve this problem: She wanted to develop small, stable and individually adaptable flow sensors and to market them with her own company.

Demand for these products is high. For example, automobile manufacturers install the probes and investigate the aerodynamics of their prototypes in the wind tunnel. Measuring flows is also necessary when making air conditioners, exhaust hoods and drones. And it's not always air that's flowing in all the applications – gas, water and oil flows can be measured as well.

However, if the sensors are too large, they develop their own resistance properties and distort the measurement results. And in the past there were no sensors that could withstand extreme temperature conditions. Kreitz saw the solution in 3D print: This technology can be used to individually adapt sensors to meet the specific needs of each customer.

The young entrepreneur founded Vectoflow GmbH in April 2015, together with Dr. Christian Haigermoser, also a TUM graduate. She turned down plenty of job opportunities at various leading companies in the market and rigorously pursued her own objective.

Kreitz and Haigermoser applied for an EXIST start-up grant from the German Federal Ministry for Economic Affairs and Energy – and were successful. However, the decision-makers on the EXIST program side wanted to see a business economist on board the team. Kreitz then quickly completed a one-year supplementary curriculum at the Collège des Ingénieurs in Paris. This is where the third partner joined the team: Florian Wehner.

Probes are used in Formula 1 racing

Prof. Christian Breitsamter of the TUM Chair of Aerodynamics and Fluid Mechanics took on the role of mentor in the context of the EXIST start-up grant, and the Chair of Turbomachinery and Flight Propulsion provided the start-up founders with an office. The team also received assistance from the UnternehmerTUM Center for Innovation and Business Creation: The "XPRENEURS" program prepared them for market entry, and "Techfounders" put them into contact with potential investors and customers. They also received 25,000 Euros in seed funding and were able to use the high-tech workshop "MakerSpace".

In the meantime Vectoflow has seven permanent employees and customers located around the world – including in China, India, Saudi Arabia and the USA. Among other things the start-up immediately supplied its probes to several racing series, including Formula 1. Kreitz: "We already turned a profit last year, after only two years in business."