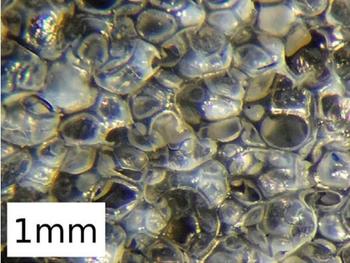 Optical microscopy image of the foam pores after impregnation of nanosilica. 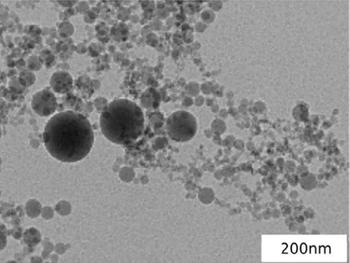 Initial nanopowder of nanosilica (SiO2) with a specific surface area of 55 m2/g. 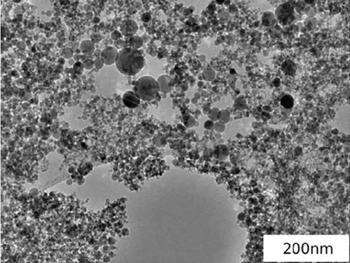 This is the initial nanopowder of nanomagnetite (Fe3O4) with a specific surface area of 70 m2/g.

The breakthrough material reduces a noise level by 100% more efficient comparing to standard analogs, cutting the level of noise transmission by 20-22 dB. The new foam reacts to sound waves not only of high but also of low frequencies, which can damage human health. A young scientist from the Far Eastern Federal University (FEFU) took part in the development.

Alexey Zavjalov, postdoc, a researcher at the Academic Department of Nuclear Technologies School of Natural Science, FEFU, worked as a part of the international team of Russian and South Korean scientists under professor S.P. Bardakhanov. Alexey's research performance led to the creation of nanofoam - the new noise-absorbing composite material.

'The problem of noise is the problem of modern technogenic civilization. In South Korea, cities are equipped with round-the-clock working stationary and mobile networks for noise levels monitoring. The urbanization level of such territorially small countries as South Korea is much higher than in Russia. However, in our country this problem is still crucial for big cities,' - explained Alexey Zavjalov. - 'The development of new noise-absorbing materials is especially interesting for the automotive industry. Modern people spend a lot of time driving cars and the noise level inside the vehicles' directly determines the quality of life. For East Asian countries, the issue of noise control is relevant for high-speed rail lines.' Porous materials are excellent sound absorbers but their noise-absorbing properties can be significantly enhanced by nanoporous grit injected into the foam structure and formed internal channels in it. Alexey Zavjalov has developed approaches for saturation of macroporous foam material with nanoporous grit.

Harmfulness of the low frequencies noises

Along with the rapid development of nanotechnology, there have been many attempts to mix nano- and microsized materials to create a modified material with enhanced strength, elastic, dynamical and vibrational properties. The acoustic parameters of such materials could not be fundamentally enhanced thus far.

Foam materials are most often used for soundproofing purposes. They provide the proper quality at a reasonable cost, but until today have been effective against high-frequency noise only. At the same time, low frequencies can be much more harmful to human health.

Infra- and low-frequency vibrations and noise (less than 0.4 kHz) are most harmful and dangerous for human health and life. Especially unfavorable is their long-lasting impact, since leads to serious diseases and pathologies. Complaints on such oppressions exceed 35% of the sum total of complaints on harmful environmental conditions.

Cheaper and easier for application than nanogel

The improved acoustic characteristics of the newest hybrid nanofoam were obtained by additional impregnation of the standard off-the-shelf sound-absorbing foam with porous granules of silica and magnetite nanoparticles. The porous foam was immersed in nanopowder suspensions in the liquid, subjected to ultrasonic treatment and dried.

The nanoparticles granules formed in the result can be compared structurally to a widely known class of materials - aerogel. It has not only excellent thermal insulation properties but also has a good noise-proof. However, aerogels are quite expensive and complex when used in structures. The new material, created according to the scheme developed by the FEFU researcher, is structurally similar to aerogel but is free of such shortcomings as a high price and engineering problems.

The mechanism of sound absorption of a new foam is based on the fact that its sound-absorbing surface is significantly scaled due to the presence of a large number of nanopores in the particles injected, as well as the location of these particles in the foam matrix in the form of distinct channels. Nanoparticles dissipate the energy of a sound wave transforming it into heat. The soundproof properties of the material increase.

Scientists found out that the composite structure is most effective for noise reduction. Thin layers of foam impregnated with nanoparticles are connected to each other in a "sandwich"-construction. This design significantly improves the soundproof properties of the resulting material. The outcome of the study also suggests that the more foamy material is impregnated with nanoparticles, the better it's sound absorption is.

'In some approximation, any material can be represented as a network of weights connected by springs. Such a mechanical system always has its own frequency bands, in which the oscillations propagate in the system relatively freely. There are also forbidden frequency bands in which the oscillations rapidly fade out in the system. To effectively extinguish the transmission of oscillations, including sound waves, the materials should be alternated in such a way that the fluctuations that propagate freely in the first material would be in the forbidden band for the second layer,'- commented Alexey Zavjalov. - 'Of course, for our foam material, this idealization is too crude. However, it allows us to clearly illustrate the fundamentally conditioned necessity of creating a "sandwich" structure.'

The study showed the effectiveness of the method of foams impregnation with nanosilica or nanomagnetite, which form granules up to several hundred micrometers (in accordance with the pore sizes of the modified foam material) and having pores about 15 nm. This small addition provided a more complex and branched 3D network of nanochannels which led to an additional absorption of noise energy.

Due to the method used, the noise absorption efficiency was achieved in the range of 2.0-6.3 kHz and at lower frequencies 0.5-1.6 kHz. The degree of absorption was increased by 60-100% and the sound transmission was reduced by 20-22 dB, regardless of the type of nanofiller.

'There is room to further improve the sound absorbing properties of the new material for medium and low frequencies using the" active control" strategy'. - Alexey Zavjalov comments on the plans for further development of such an important scientific topic. - 'First of all, this refers to the materials obtained by using a magnetite nanopowder. Active noise protection systems have long been used in the world. The main idea is to detect the noise acoustic fields "online" and to generate sound waves in antiphase by means of loudspeakers. That allows achieving a significant reduction of noise in a given area. Concerning the nanofoam, it's proposed to adopt this approach and to actively exert on a material saturated with granules of magnetite nanoparticles by magnetic fields. This will achieve even better noise reduction.'