The Secret Contamination of Polar Bears 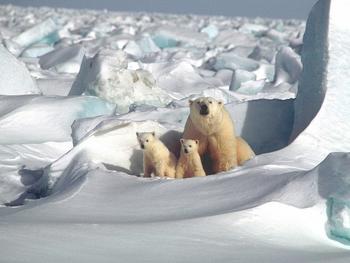 Using a new approach to measure chemical contaminants in polar bears, scientists from Canada and the United States found a large variety of new chlorinated and fluorinated substances, including many new polychlorinated biphenyl metabolites. Worryingly, these previously unrecognized contaminants have not declined in the past decades, and many long-chain fluorinated alkyl sulfonic acids have been increasing over time, says the study published in the journal Angewandte Chemie.

Whatever pollutants fish and other marine living species take up, they can end up biomagnifying in the polar bears that eat them. Halogenated contaminants were recognized in polar bear serum for the first time in the 1970s, and since then have been monitored frequently, as these man-made substances or their direct metabolites have been linked to disturbances of the immune system or endocrine function. The current study with leading author Jonathan W. Martin from the University of Alberta, Edmonton, Canada, and now at Stockholm University, Sweden, gives a survey on the different classes of halogenated contaminants now detected in polar bear serum, and also tracks down the trends in contamination during the last two decades.

Prof. Martin and PhD Student Yanna Liu chose two polar bear subpopulations, one from Hudson Bay and one from the Beaufort Sea in the Northern Arctic, for analysis. Serum taken from each population was pooled and then examined by high-performance chromatography and high-resolution mass spectrometry techniques, after stripping from protein and phospholipids and extraction into plastic capillaries. Former studies have relied on gas chromatography techniques, requiring more and harsher purification steps.

One major class of substances discovered were the polychlorinated biphenyls (PCBs), which have been known to accumulate in polar bears since the 1970s. Although banned from production worldwide in the 1980s, PCBs, for which adverse health effects have been proven, persist so long in the environment that they can still be found all over the world. In addition to known metabolites of PCBs, the scientists discovered previously unknown PCB metabolites. And as they demonstrate, all these novel substances were also formed by mice exposed to a PCB mixture, suggesting that other mammals may also be exposed to these chemicals.

Other class identified were new groups of perfluoroalkyl sulfonic acids (PFASs), including the perfluoroalkyl ether sulfonates, some of which may still be used in a wide range of industrial applications. Especially the long-chain PFASs seem to have adverse reproductive, developmental and systemic effects. For these chemicals, Prof. Martin and his colleagues observed a worrying trend of increasing accumulation from 1984 to 2014, especially in the polar bear subpopulation from the Beaufort Sea. This location is closer to the Chinese bustling economic regions where still large outputs of these multipurpose chemicals have been reported.

Finally, the scientists discovered several other polychlorinated compounds in polar bears for the first time, including several chlorinated aromatics. In view of their findings, especially the trends, the authors strongly suggest a reassessment of the health risks associated with these stable metabolites. Despite some regulatory restrictions and bans on production, their concentrations have not declined, but are still increasing in endangered species that live in such remote areas as in the Arctic.