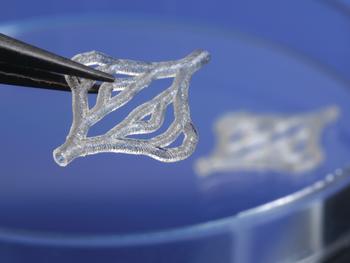 The aim is to use the combi-machine to produce branched microtubes as well as complete microfluidic systems.

Either fast or precise – both cannot be achieved in the production of the finest polymer structures with the laser. Or maybe they can? Combining stereolithography and multiphoton polymerization should make it possible: Scientists at the Fraunhofer Institute for Laser Technology ILT are developing a machine for high-precision, cost-effective 3D construction technologies using both methods. On November 1, 2018, Fraunhofer ILT and its project partners launched the project “High Productivity and Detail in Additive Manufacturing through the Combination of UV Polymerization and Multi-Photon Polymerization – HoPro-3D”, which is funded by the European Union and the state of North Rhine-Westphalia.

Together with LightFab GmbH from Aachen, Bartels Mikrotechnik GmbH from Dortmund and Miltenyi Biotec GmbH from Bergisch Gladbach, experts of the Fraunhofer ILT are developing a new machine for producing macroscopic polymer structures with a resolution down into the submicrometer range. So far, various separate processes have been available for this purpose: UV polymerization based on lasers, such as, for example, stereolithography (SLA) or micromirror arrays (DLP), and multiphoton polymerization (MPP) on a microscopic scale.

In the SLA process, a UV laser writes a two-dimensional structure in a resin bath, causing the photosensitive material to polymerize. The component is lowered step by step and a 3D structure is built up in layers. For the most part, the build-up rate is well above 1 mm³ per second. Newer 3D printer use UV LED light engines and a DLP (Digital Light Processor) chip instead of the scanner. This allows the exposure to be parallelized, thus increasing the build rate. Both methods achieve a maximum resolution above 10 μm.

The multiphoton polymerization is suitable for constructing even finer structures. In this process, the necessary photon energy is generated by intense laser pulses with wavelengths in the visible or infrared range, with several low-energy photons virtually adding up to a UV photon. The advantage is the extremely high precision of up to 100 nm in all three spatial directions; however, the build rate here is only about 10 μm³ per second.

Saving time with two systems in one machine

The project partners are now combining the DLP-based process with the MPP process and developing a machine with two selectable exposure systems for either high build rates or high precision. They use high-performance LEDs emitting at 365 nm wavelength and a DLP chip with HD resolution for lithography. The MPP module uses a femtosecond laser with a fast scanner and microscope optics.

“The advantage lies in the interplay between the two procedures: Depending on the need, we intend to switch between the exposure systems in the process,” explains Dr. Martin Wehner, HoPro-3D project manager at Fraunhofer ILT. “The challenge we face is in process control. The concept has been developed, currently an appropriate machine is being built.”

In addition, control software is being developed, which shall independently decide – on the basis of CAD data – when a change between the two sources makes sense. The bottom line is that this transition works smoothly and the structures can be built in a resin vat without having to change the photo resin. The project team is examining different materials and optimizing the process combination in detail.

Applications not only in biomedicine

Many components have a body that can be assembled quickly, but also certain structures that require high precision. The combination of processes allows, for example, optical function elements such as lenses or prisms to be integrated directly into a larger component with great precision. Thanks to this approach, complete collimating optics for reading optical information in analysis technology can conceivably be built.

The fields of application are manifold, but this machine should prove most interesting for the production of components used in biomedical analysis technology. Support scaffolds for 3D tissue models, micromechanical components or complete microfluidic systems are typical application examples for this.