Keep in touch, use the vacuum! How mirrors can control physics and chemistry 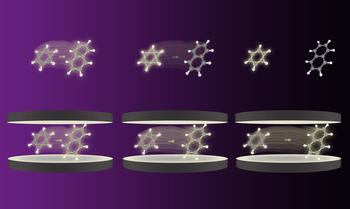 Schematic of energy transfer between two molecules outside (top) and inside a controlled vacuum originating from closely placed mirrors (bottom). Under normal conditions, a swift loss of transfer efficiency occurs under when the distance between the molecules is increased. However, the controlled vacuum with its real and virtual photons alters this behavior up to the point of high efficiency even over long distances.

Hamburg scientists’ theory of polaritonically amplified energy transfer over long distances between molecules paves the way for a new level of chemical engineering and ‘spooky chemistry’.

Scientists from the Theory Department of the Max Planck Institute for the Structure and Dynamics of Matter (MPSD) at the Center for Free-Electron Laser Science (CFEL) in Hamburg have shown through computer simulations that the transfer of energy and charge between molecules can be drastically enhanced and controlled with virtual photons. This fundamentally alters the guidelines for chemical reactions and advances a new field of chemical control by non-intrusive methods acting at a distance.

In contrast to our loss of imagination, the subject of Michael Ende’s famous ‘Never-ending story’, nothing is never truly nothing in physics. Where the novel evocatively describes the absence of everything imaginable, the ‘vacuum’ proves once again its highly underestimated status. As a consequence of quantum mechanics, the possibility for something to happen inevitably leads to its existence, if only for an unimaginably short time span. This includes the quantized fractions of light: virtual photons.

The influence of these virtual particles, which do not even exist in a classical sense, has fascinated scientists for more than a century. The features of the vacuum, how they emerge and its consequences, can be changed by controlling its environment. For example, placing two ordinary mirrors close to each other and changing their distance can alter the course of chemical reactions occurring in between them, not because the molecules interact with the mirrors’ surfaces but solely because the mirrors force the vacuum to behave in a specific way.

Experiments and theoretical calculations prove that those seemingly incredible effects exist and that they can present a vital control-mechanism. The MPSD team of Christian Schäfer, Michael Ruggenthaler, Heiko Appel and Angel Rubio has now demonstrated how drastically chemical paradigms can change when exposed to a controlled vacuum. Their study is due to be published in the Proceedings of the National Academy of Science (PNAS) this month.

While chemical reactions usually follow well-established rules, the holy grail of chemistry is to exert control over those reactions. The long-standing alchemic dream of transforming any material into its desired product, subject to our will and control, is a driving force behind chemical and physical research. Schäfer and others show that we are not bound by the paradigmatic rules which drive research, but that those rules themselves can be fundamentally altered by controlling the vacuum.

This change of perspective demonstrates that molecules can transfer energy and charge extremely efficiently over long distances by means of real and virtual photons which act as a glue between them. Control over the vacuum then provides control over chemical reactions, lets particles talk to each other highly efficiently over long distances (‘spooky interactions’), and enforces their positions – all by changing something as simple as the distance between two mirrors.

The clue is, that the controlled vacuum leads to novel states of mixed light and matter character, known as polaritons, so that even widely separated molecules are connected to each other by the fast and over long distances efficient light-character, very much like equipping twointerlocutors with light signals.

“The future seems as fantastic as the ‘Never-ending story’ itself,” says Christian Schäfer. “The experiments already prove that common chemical reactions, essential for our modern life, can be controlled and accelerated by those novel means and the associated theory provides a highly optimistic view into the future of those modern control tools.”

MPSD Theory Director Angel Rubio adds: “Experiment and theory in this field will add new facets to our modern views on material and reaction design that will provide us with highly efficient tools to tackle modern-day problems such as energy harvesting and capturing. This novel approach has vast potential applications, can be automatically extended to connect distant extended bodies, such as two-dimensional materials and solids, and promises great new technological possibilities for the future.”