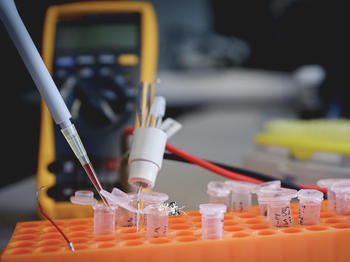 A Bochum research team has developed a spectro-electrochemical method in order to characterise individual nanoparticles.

Thanks to their antibacterial properties, the particles are used in many products. Their effect on the environment is largely unexplored. This is mainly due to the lack of suitable analytical methods.

Researchers from the Resolv Cluster of Excellence at Ruhr-Universität Bochum have developed a method to investigate the behaviour of silver nanoparticles in natural waters. The particles regularly enter the sea from products such as sportswear and food packaging. What happens to them there is largely unknown.

Using a combination of electrochemical and spectroscopic methods, chemists can monitor the reaction of individual particles in solution, even if it contains salts or algae. Conventional methods cannot cope with these interfering factors and only work in a high vacuum. The science magazine Rubin from Ruhr-Universität reports on the work of Professor Kristina Tschulik and her Research Group for Electrochemistry and Nanoscale Materials.

Not measurable so far

Due to their antibacterial and anti-inflammatory effect, silver particles are popular in industry. They can be found not only in the sea, but also in process wastewater from manufacturing companies. “As long as there are no established measuring techniques and no legal obligations to detect such particles, companies do not do so,” says Kristina Tschulik. The Bochum chemists therefore developed a sensor that allows silver particles to be specifically examined, even in complex environments.

To show that the method is robust against sources of interference, they used water samples from an untouched Canadian fjord in a first step. Although this water contained salts, algae and other interfering factors, it did not contain any industrial impurities. The researchers added these themselves with a commercially available silver nanoparticle spray available on the Internet to disinfect cutlery and as a remedy for bad breath in dogs. Then they showed that they could detect the particles in this complex environment using electrochemical techniques.

Particles clump together and sink

With their newly devepoled combined spectro-electrochemical approach, the chemists showed in further studies what happens to silver particles in salty water. “It had previously been assumed that the silver particles would dissolve in seawater,” explains Tschulik.  This assumption was disproven. The particles clump together and transform into silver chloride. They would presumably sink to the bottom and sediment. “They would then be removed from the water, but we would have to consider what long-term consequences these heavy metal deposits could have for marine inhabitants living near the bottom,” says Tschulik.

“We should not panic based on such an individual result,” adds the chemist. This is because different nanoparticles can behave very differently. It is thus not possible to apply the results of few studies to all particles. “However, the more we use nanoparticles, the more important it is for us to be able to assess their effects,” says Tschulik.

For the process, the researchers immerse a wafer-thin electrode in the particle solution and apply a voltage to the electrode. As small particles in liquids move in an undirected manner, some of them strike the electrode over time. If the voltage is selected correctly, these particles react on the electrode surface. Silver particles, for example, are converted into silver chloride or dissolved. Each time a silver atom reacts to form a single positively charged silver ion, an electron is released, which flows off as a current through the electrode. By measuring the current flow, the chemists can deduce the number of atoms that have reacted and thus the size of the particle.

Kristina Tschulik helped to develop this electrochemical method in Oxford from 2012 on. Her Bochum team has now brought it together with the so-called dark-field microscopy. The latter allows the chemists to visualize the particles in real time as coloured dots. Using the colour change, or more precisely using the spectral information, they can track what happens to the particles on the electrode surface, for instance, whether they dissolve or transform, for example into silver chloride.