Testing the symmetry of space-time by means of atomic clocks 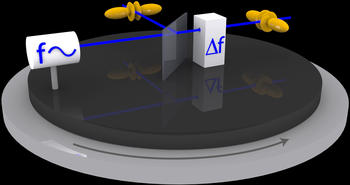 A tunable laser excites an extremely narrow-band resonance in an Yb+ ion of an atomic clock. The electron wave function of the ion's excited state is marked in yellow. Two ions with wave functions that are oriented at right angles are interrogated by means of laser light with an adjustable frequency shift Δf to measure a possible frequency difference. The whole experimental setup rotates together with the Earth once a day relative to the fixed stars.

In his Special Theory of Relativity, Einstein formulated the hypothesis according to which the speed of light is always the same, no matter what the conditions are. It may, however, be possible that – according to theoretical models of quantum gravitation – this uniformity of space-time does not apply to particles. Physicists have now tested this hypothesis with a first long-term comparison of two optical ytterbium clocks at the Physikalisch-Technische Bundesanstalt (PTB). With these clocks, whose error amounts to only one second in ten billion years, it should be possible to measure even extremely small deviations of the movement of the electrons in ytterbium. But the scientists did not detect any change when the clocks were oriented differently in space. Due to this result, the current limit for testing the space-time symmetry by means of experiments has been drastically improved by a factor of 100. In addition to this, the extremely small systematic measurement uncertainty of the optical ytterbium clocks of less than 4 × 10-18 has been confirmed. The team consisting of physicists from PTB and from the University of Delaware has published its results in the current issue of Nature.

It is one of the most famous physics experiments in history: As early as 1887, Michelson and Morley demonstrated what Einstein later expressed in the form of a theory. With the aid of a rotating interferometer, they compared the speed of light along two optical axes running vertically to each other. The result of this experiment became one of the fundamental statements of Einstein's Special Theory of Relativity: The speed of light is the same in all directions of space. Now one could ask: Does this symmetry of space (which was named after Hendrik Antoon Lorentz) also apply to the motion of material particles? Or are there any directions along which these particles move faster or more slowly although the energy remains the same? Especially for high energies of the particles, theoretical models of quantum gravitation predict a violation of the Lorentz symmetry.

Now an experiment has been carried out with two atomic clocks in order to investigate this question with high accuracy. The frequencies of these atomic clocks are each controlled by the resonance frequency of a single Yb+ ion that is stored in a trap. While the electrons of the Yb+ ions have a spherically symmetric distribution in the ground state, in the excited state they exhibit a distinctly elongated wave function and therefore move mainly along one spatial direction. The orientation of the wave function is determined by a magnetic field applied inside the clock. The field orientation was chosen to be approximately at right angles in the two clocks. The clocks are firmly mounted in a laboratory and rotate together with the Earth once a day (more exactly: once in 23.9345 hours) relative to the fixed stars. If the electrons' speed depended on the orientation in space, this would thus result in a frequency difference between the two atomic clocks that would occur periodically, together with the Earth's rotation. To be able to differentiate such an effect clearly from any possible technical influences, the frequencies of the Yb+ clocks were compared for more than 1000 hours. During the experiment, no change between the two clocks was observed for the accessible range of period durations from a few minutes up to 80 hours. For the theoretical interpretation and calculations concerning the atomic structure of the Yb+ ion, PTB's team worked in collaboration with theoreticians from the University of Delaware (USA). The results that have now been obtained have improved the limits set in 2015 by researchers from the University of California, Berkeley with Ca+ ions drastically by a factor of 100.

Averaged over the total measuring time, both clocks exhibited a relative frequency deviation of less than 3 × 10–18. This confirms the combined uncertainty of the clock that had previously been estimated to be 4 × 10-18. Furthermore, it is an important step in the characterization of optical atomic clocks at this level of accuracy. Only after roughly ten billion years would these clocks potentially deviate from each other by one second.