Production of catalyst in one single step 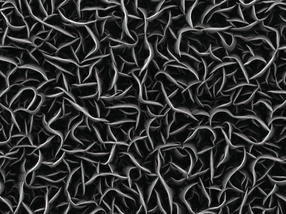 The picture taken by scanning electron microscope shows carbon nanowalls with a thickness of only a few nanometers.

Not much is possible without catalysts: More than 80% of all chemically manufactured products undergo a catalytic step during their production. The active material is usually platinum or another precious metal, so production is correspondingly expensive and requires several steps. Physicists at the University of Duisburg-Essen (UDE) have now filed a patent application for a process that produces highly active and long-term stable catalyst material in a single step.

The catalyst material produced by the physicists Dr. Nicolas Wöhrl and Sebastian Tigges consists almost entirely of surface – and is therefore perfect for the purpose: the more surface available, the more reactions can take place simultaneously.

The promising material was formed in a plasma coating plant. The scientists let a carbon-containing powder with platinum atoms evaporate and introduced it into the plasma system through a carrier gas. At around 350°C, carbon walls only a few nanometers thin form along electrical field lines. They already comprise the platinum nanoparticles.

"As a scientist, you sometimes need to be lucky", says Wöhrl. "It worked quickly and it worked well. With a diameter of around 1.8 nanometers, the particles had the right size, are free of contaminations and have settled directly in the walls." The scientists are currently investigating how far the particles must be anchored in the walls in order to remain there permanently, but at the same time protrude far enough to serve as catalytic centers. The distribution and chemical structure of walls and nanoparticles can be controlled independently by the process.

In the "MoRE InnoMat" project, the physicists are already working with chemists from the UDE and industrial partners who are scaling the process to their standards. In collaboration with The Hydrogen and Fuel Cell Center (ZBT), a demonstrator with a surface area of just a few cm2 is currently being built for the development of a micro fuel cell.

"We are generally open to cooperation with various fields”, explains Wöhrl. "This is the only way we can sound out the limits of our process." And Tigges adds: "How awesome would it be if we ever held a smartphone in our hands that is based on our material?