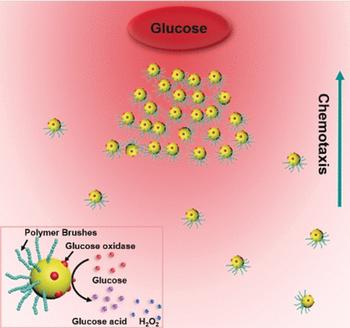 Bacteria can actively move towards a nutrient source—a phenomenon known as chemotaxis—and they can move collectively in a process known as swarming. Chinese scientists have redesigned collective chemotaxis by creating artificial model nanoswimmers from chemically and biochemically modified gold nanoparticles. The model could help understand the dynamics of chemotactic motility in a bacterial swarm, concludes the study published in the journal Angewandte Chemie.

What causes swarming, and whether such collective behavior can be translated into artificial intelligent systems, is currently a topic of intensive scientific research. It is known that bacteria swimming in a dense pack feel the surrounding fluid differently from a sole swimmer. But to what degree swimmers are sped up in a swarm, and what other factors play a role, is still unclear. Colloidal chemist Qiang He at the Harbin Institute of Technology, China, and his colleagues, have now constructed a simple artificial model of bacteria-like nanoswimmers. They observed active chemotactic behavior and formation of the swimmers into a distinctly moving swarm.

He and his colleagues constructed their artificial swimmers from tiny spheres of gold. With a size 40 times smaller than a usual bacterium, the gold nanoparticles were below the detection limit of the microscope. However, thanks to a light-scattering phenomenon called the Tyndall effect, the scientists could observe larger changes in the solution containing swimmers, even with the naked eye. Using other analytical techniques, they also resolved the speed, orientation, and concentration of the particles in finer detail.

Scientists enjoy working with gold nanoparticles because the tiny spheres form a stable, disperse solution, are readily observed with an electron microscope, and molecules can be attached to them relatively easily. He and his team first loaded the surface of large silica spheres with gold particles. Then they attached polymer brushes on the exposed side of the gold spheres. These brushes were made of polymer chains, and with a length of up to 80 nanometers, they rendered the gold particles highly asymmetric.

The researchers dissolved the silica carrier and tethered an enzyme on the exposed side of the gold spheres so that the resulting nanoparticles were covered with long and thick polymer brushes on one side and with the enzyme on the other. In the presence of oxygen, the glucose oxidase enzyme decomposes glucose into a compound called gluconic acid.

To determine if the nanoswimmers would actively swim in a given direction, the authors placed them at one end of a small channel and placed a permanent glucose source at the other end. Similarly to living bacteria, the model swimmers actively traveled along the glucose gradient towards the glucose source. This fact alone was not surprising as enzymatically driven, self-propelling swimmers are known from experiment and theory. But the authors could also detect swarming behavior. The asymmetric nanoparticles condensed into a separate phase that moved collectively along the nutrient gradient.

The authors imagine that the nanoswimmers could be further developed as valuable and easily accessible physical models to study the chemotactic and swarming behavior of living or non-living things on the nanoscale.