Superfluorescent emission in the UV range 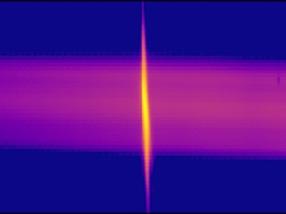 The xenon superfluorescence shows up as a bright line (yellow) superimposed on the averaged free-electron laser spectrum (purple, averaged over many shots).

Scientists have for the first time induced superfluorescence in the extreme ultraviolet range. Superfluorescence, or superradiance, could be used to build a laser that does not require an optical resonator. The team headed by DESY’s lead scientist Nina Rohringer used DESY’s free-electron laser FLASH to stimulate xenon, a noble gas, inside a narrow tube, causing it to emit coherent radiation, like a laser.

In superfluorescence, the incident light is amplified and emitted along the axis of the medium as a narrow beam of coherent radiation, like in a laser. To produce superfluorescence in the XUV spectrum, the incoming light needs to have enough energy to knock the electrons out of the inner shell of the atoms that make up the lasing medium. Redistribution within the electron shell (Auger decay) leads to a situation in which more particles find themselves in an excited state than in an unexcited state. Physicists refer to this as population inversion.

When an atom drops from an excited to a lower energy state, it emits a photon. If enough atoms undergo population inversion, a small number of isolated decays of the excited states of individual atoms produce a strongly correlated quantum mechanical state, known as entanglement, so that the entire ensemble of excited atoms drops to a lower energy level in unison (coherently), emitting a high-intensity pulse of light.

The simultaneous emission is caused by a quantum mechanical effect, which is however expressed macroscopically: the entangled atoms are not individually coupled to the quantised light field (vacuum fluctuations in the light field), but as a single, overall medium.

The team of Nina Rohringer from DESY, Laurent Mercadier from the European XFEL and José Ramon Crespo López-Urrutia from the Max Planck Institute of Nuclear Physics in Heidelberg fired intense, used the CAMP scientific instrument to focus pulses from FLASH into a cell filled with xenon gas, to produce a plasma channel 4.5 millimetres long and 0.04 millimetres in diameter. The high-energy pulses, having a wavelength of 13 nanometres (millionths of a millimetre), produced a strong population inversion in the gas, which discharged after about a tenth of a nanosecond to emit a bright, laser pulse lasting 7 to 21 trillionths of a second (picoseconds) and having wavelengths of 65 and 68 nanometres.