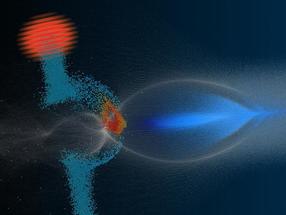 Illustration, based on simulations, of the Trojan Horse technique for the production of high-energy electron beams. A laser beam (red) strips electrons (light blue dots) off of helium atoms. Some of the freed electrons (red dots) get accelerated inside a plasma bubble (white elliptical shape) created by an electron beam (dark blue).

Using a trick modelled on the Trojan Horse, a novel electron source can generate extremely brilliant particle beams. The new method uses plasma acceleration technology and promises 100 to 10,000 times more tightly focused electron beams than conventional accelerators can currently deliver. An international team headed by Bernhard Hidding from the University of Strathclyde in Glasgow, Scotland, has successfully tested the method at the US SLAC National Accelerator Laboratory in California and presents the results in the journal Nature Physics. DESY researchers played a major role in the work.

High-energy electron beams are versatile tools for exploring the realm of molecules, atoms and elementary particles. They can either be used to collide electrons and their anti-particles, positrons, in order to unravel the secrets of the subatomic world. Or they can be fed into specialised magnet arrangements to generate extremely bright X-rays, which can be used, for example, to observe proteins at work and analyse the inner structure of new nanomaterials. “In any case, the colder and smaller the electron beams are, the better,” explains DESY physicist Alexander Knetsch, co-author of the publication.

The team tested a process in which “cold” electrons with just little kinetic energy are accelerated by a plasma wave. A plasma is a gas in which the electrons have been stripped from the molecules or atoms so that they are electrically charged. If a strong laser pulse or a high-energy electron bunch is fired into the plasma, it generates an electrically charged wave in its wake on which electrons can ride like a surfer on an ocean wave. This plasma wakefield acceleration can accelerate particles much stronger over a short distance than the best conventional accelerator technology available today. However, plasma wakefield acceleration is still in the experimental phase and there are only few applications yet.

“The colder the electrons are at the beginning of acceleration, the slower they move, and the closer they stay together – an important prerequisite for strongly focused beams,” says Knetsch. For their method, the physicists released cold electrons into the hot plasma bubble in a similar way to how the Greeks allegedly once smuggled soldiers into the besieged city of Troy in a wooden horse. Instead of a wooden horse, however, helium atoms served as hiding places for the electrons.

The researchers used a mixture of hydrogen and helium as gas. The laser that generated the plasma was just energetic enough to release the hydrogen's electrons, but not the helium's. The scientists thus produced a plasma wave from hydrogen, while the helium remained unimpressed. With a precisely targeted second laser pulse, which had a slightly higher energy, they then released electrons from their “Trojan Horses”, the helium atoms, right inside the plasma bubble. These still cold electrons were generated in a tiny range of a few thousandths of a millimetre in diameter and even more strongly compressed by the incoming plasma wave.

“Our experiment shows for the first time that the Trojan horse method actually works,” emphasizes Hidding. “It's one of the most promising methods for future electron sources and could push the boundaries of today's technology.” This plasma set-up takes over the function of the photocathode, which is usually used as an electron source for conventional particle accelerators. In these highly specialized devices, a laser knocks electrons out of a piece of metal, captures them with a strong electromagnetic field and bundles and packs them into bunches that are finally fed into the accelerator.

The electrons from the plasma photocathode that has now been successfully tested could also be fed into a particle accelerator, but they can also be accelerated to high energies directly in the plasma itself. In the pilot experiment, the electrons reached up to 700 mega electron-volts. The researchers estimate that the beam quality can already compete with conventional electron sources. In further experiments aim to increase the quality and stability of the beam, and also to improve beam diagnostics.