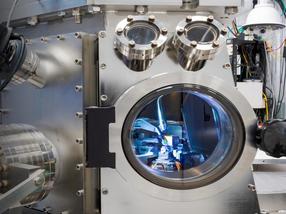 Looking into the hard X-ray nanoprobe synchrotron chamber while measuring a response of an individual cuprous oxide particle to the exposure of carbon dioxide, water and light.

The concentration of carbon dioxide in our atmosphere is steadily increasing, and many scientists believe that it is causing impacts in our environment. Recently, scientists have sought ways to recapture some of the carbon in the atmosphere and potentially turn it into usable fuel -- which would be a holy grail for sustainable energy production.

In a recent study from the U.S. Department of Energy's (DOE) Argonne National Laboratory, scientists have used sunlight and a catalyst largely made of copper to transform carbon dioxide to methanol. A liquid fuel, methanol offers the potential for industry to find an additional source to meet America's energy needs.

"Carbon dioxide is such a stable molecule and it results from the burning of basically everything, so the question is how do we fight nature and go from a really stable end product to something useful and energy rich." -- Argonne Distinguished Fellow Tijana Rajh

The study describes a photocatalyst made of cuprous oxide (Cu­2O), a semiconductor that when exposed to light can produce electrons that become available to react with, or reduce, many compounds. After being excited, electrons leave a positive hole in the catalyst's lower-energy valence band that, in turn, can oxidize water.

"This photocatalyst is particularly exciting because it has one of the most negative conduction bands that we've used, which means that the electrons have more potential energy available to do reactions," said Argonne distinguished fellow Tijana Rajh, an author of the study.

Previous attempts to use photocatalysts, such as titanium dioxide, to reduce carbon dioxide tended to produce a whole mish-mash of various products, ranging from aldehydes to methane. The lack of selectivity of these reactions made it difficult to segregate a usable fuel stream, Rajh explained.

"Carbon dioxide is such a stable molecule and it results from the burning of basically everything, so the question is how do we fight nature and go from a really stable end product to something useful and energy rich," Rajh said.

The idea for transforming carbon dioxide into useful energy comes from the one place in nature where this happens regularly. "We had this idea of copying photosynthesis, which uses carbon dioxide to make food, so why couldn't we use it to make fuel" Rajh said. "It turns out to be a complex problem, because to make methanol, you need not just one electron but six."

By switching from titanium dioxide to cuprous oxide, scientists developed a catalyst that not only had a more negative conduction band but that would also be dramatically more selective in terms of its products. This selectivity results not only from the chemistry of cuprous oxide but from the geometry of the catalyst itself.

"With nanoscience, we start having the ability to meddle with the surfaces to induce certain hotspots or change the surface structure, cause strain or certain surface sites to expose differently than they are in the bulk," Rajh said.

Because of this "meddling," Rajh and Argonne postdoctoral researcher Yimin Wu, now an assistant professor at the University of Waterloo, managed to create a catalyst with a bit of a split personality. The cuprous oxide microparticles they developed have different facets, much like a diamond has different facets. Many of the facets of the microparticle are inert, but one is very active in driving the reduction of carbon dioxide to methanol.

"In order to make fuel, you not only need to have carbon dioxide to be reduced, you need to have water to be oxidized," Rajh said. "Also, adsorption conformation in photocatalysis is extremely important -- if you have one molecule of carbon dioxide absorbed in one way, it might be completely useless. But if it is in a bent structure, it lowers the energy to be reduced."