Tenth Record-Breaking Year in a Row for ZEISS 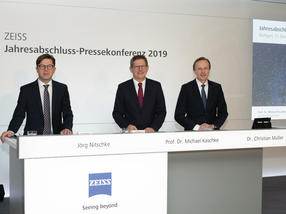 "All ZEISS segments have developed extremely well. This is quite remarkable, especially in the midst of an uncertain economic climate and profound structural change in different industries," says President & CEO, Prof. Dr. Michael Kaschke. "ZEISS has consistently prepared for these scenarios and is well-positioned for the future as well as resilient thanks to its corporate strategy, the ZEISS Agenda 2020. Moreover, as a global technology leader, ZEISS is on its way in many segments and areas to becoming a shaper in its markets.”

In 2018/19, the ZEISS Group saw robust growth in all four segments. The Semiconductor Manufacturing Technology segment enjoyed very good economic development and thus achieved record revenue – thanks in part to the market launch of EUV technology. The first premium end devices with chips produced using ZEISS EUV optics are already available on the market. In the areas of measuring technology and quality assurance, the Industrial Quality & Research segment was impacted by the weak development on the automotive market. However, it was able to generate additional growth with surface measurement and digitalization solutions by acquiring GOM GmbH. The microscopy business has stabilized and exceeded expectations.

The launch of new innovations contributed to the Medical Technology segment's growth, which enjoyed particularly strong growth in APAC. There was greater demand for both microsurgery and ophthalmology solutions. The strategic business unit Vision Care, which is part of the Consumer Markets segment, enjoyed above-market growth that also outpaced the competition – especially in emerging markets – and its revenue surpassed the billion euro mark for the first time. In Consumer Products, the SLR photography lens business still faces increased pressure, the range of SLR cameras in particular is shrinking. However, the lens business for mirrorless cameras was able to pick up speed.

In 2018/19, the ZEISS Group generated approximately 90 percent of its revenue outside Germany. With a revenue increase of 15 percent (like-for-like), the dynamic national economies in the APAC region in particular continued to drive this positive trend. In the EMEA region, ZEISS was able to further grow with an 8 percent increase in revenue (like-for-like). In the Americas region, revenue of 1.347 billion euros was 2 percent higher than last year's figure (like-for-like). Here, ZEISS has not yet fully leveraged the potential for growth.

The 10 percent increase in expenditures for research and development is a particularly strong indicator of the company's innovation strategy: In fiscal year 2018/19, these expenditures totaled 705 million euros (2017/18: 642 million euros). Support for this strategy came from substantial investments in property, plant and equipment, which also increased significantly to 437 million euros (2017/18: 244 million euros) during the reporting period – as compared to depreciations totaling 234 million euros (2017/18: 164 million euros). "ZEISS' targeted innovation strategy, combined with substantial expenditures and investments, is a cornerstone of the accelerated growth," says Chief Financial Officer, Dr. Christian Müller. ZEISS also considers it part of its responsibility to deploy sustainability measures that are even more far-reaching than those already in place. On the path to becoming carbon-neutral, the company has decided to switch to a CO2-neutral energy supply in Germany by 2022. "We are making a real difference by implementing a great number of concrete measures to reduce CO2 emissions and protect the climate," says Müller.

The acquisitions concluded during the fiscal year include IanTECH Inc., a micro-interventional cataract surgery specialist headquartered in Reno, USA; and GOM GmbH, a leading supplier of hardware and software for automated 3D coordinate measuring technology headquartered in Braunschweig, Germany. In October 2019, it was announced that ZEISS would invest in Senorics GmbH and enter into a technology partnership with this sensor solutions start-up from Dresden, Germany. At the end of November 2019, the complete acquisition of SAXONIA Systems AG was announced. ZEISS had already acquired a 25 percent stake in the software specialist from Dresden back in 2018. "As part of our cooperations and acquisitions, we are always on the lookout for partners with whom we can expand our technology and software expertise," says Kaschke. "This enables us to focus on opening up new fields of technology and drive strategically important digital projects within the ZEISS Group."

Net liquidity totaled 1,548 million euros on 30 September 2019. It was lower than the previous year (2,120 million euros), primarily due to the acquisitions. However, it continues to ensure sufficient flexibility for strategic acquisitions and investments.

As of 30 September 2019, ZEISS had a global workforce of 31,260 employees – with 17,950 outside Germany. The number of employees grew worldwide by 7 percent. The headcount increase occurred primarily in Germany, which added 1,243 new employees. In 2019, employees also shared in the company's success for the tenth year in a row, receiving a total of 42 million euros.

"The tenth record-breaking year in a row confirms that we are on the right track with our corporate strategy, the ZEISS Agenda 2020. This ongoing success also reflects the long-standing trust our customers and partners place in ZEISS. On behalf of the Executive Board, I would like to say thank you. The ZEISS Group's achievements would be unimaginable without our dedicated employees, whose hard work and energy earn customers' trust time and time again. For this, we would like to say how grateful we are to the over 31,000 Zeissians," says Kaschke.

Economic growth slowed down even more this year, and a further slump in current growth is expected for next year. The risks in global trade continue to increase, and there is no sign of de-escalation, which would require reducing trade barriers: "While the current number of incoming orders is reason to be optimistic, we do not presume that ZEISS, for all its strengths, can remain completely unaffected by economic fluctuations. That is why we are working specifically on strengthening our ability to adapt and our resilience," says Kaschke. "The goal for fiscal year 2019/20 is to once again increase revenue and continue to achieve a high EBIT margin of over 10 percent – a challenging goal in light of the economic downturn and the need to maintain our significant R&D expenditures."