Electroreduction of carbon monoxide for the highly selective production of ethylene 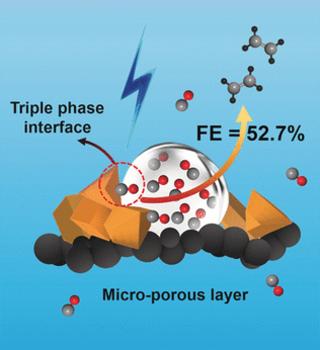 Ethylene, or ethene, is a primary feedstock for the chemical industry, including as a starting material for the production of a wide variety of plastics. In the journal Angewandte Chemie, scientists have now introduced a new electrochemical technique for selective and energy-efficient production of ethylene from carbon monoxide, which can be obtained from renewable resources and waste.

From both economic and environmental points of view, the conversion of carbon monoxide (CO) into ethylene by energy-efficient methods is a key process for use of non-petrochemical raw materials. Today, ethylene is typically produced by steam cracking of naphtha derived from petroleum refineries. In this process, long-chain hydrocarbons are split into shorter chains at 800 to 900 °C. Alternatively, ethylene can be produced from synthesis gas—a mixture of CO and hydrogen obtained from coal gasification—though it can also be obtained from biogas, wood, and waste as carbon sources. The Fischer–Tropsch process can be used to convert synthesis gas into a mixture of hydrocarbons, including ethylene. The disadvantages of this method are the energy-intensive conditions of 200 to 250 °C, 5 to 50 bar of pressure, and the consumption of valuable hydrogen. In addition, a maximum of 30% of the products are the preferred C2 hydrocarbons (ethylene and ethane). Formation of longer chains cannot be prevented, the process for separating out ethylene is complex, and 30–50% CO2 is also produced, which is an undesired emission and represents a waste of carbon.

Researchers working with Dehui Deng at Xiamen University and the Dalian Institute of Chemical Physics of the Chinese Academy of Sciences have now introduced a new approach for a direct electrocatalytic process for the highly selective production of ethylene. In this method, CO is reduced with water at room temperature and standard pressure, using a copper catalyst and electric current.

By optimizing the structure of their gas diffusion electrode, the researchers were able to achieve an unmatched Faradaic efficiency (charge-transfer efficiency within an electrochemical reaction) of 52.7% and they cracked the 30% limit for C2 selectivity. No CO2 emission occurs. The success of the approach hinges on a microporous layer of carbon fibers with an optimally tuned hydrophobicity, which acts as a support for catalytically active copper particles, and an optimized potassium hydroxide concentration in the aqueous phase. This increases the CO concentration at the electrode and increases coupling between the carbon atoms. The side products of this reaction, ethanol, n-propanol, and acetic acid, are liquids, allowing for easy separation of gaseous ethylene.