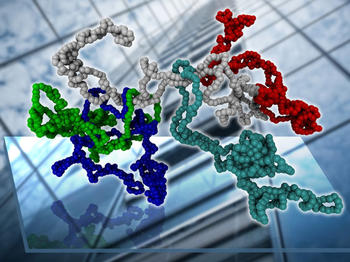 Ring molecules (differentiated by colors) exhibit mutual threadings that inhibits their motion and renders the glass. 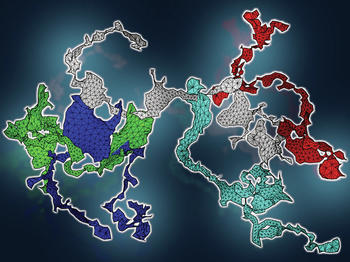 To visualise and quantify the threadings we computationally spanned a triangulated minimal surface (bubble) on each ring molecule (here the contour of a surface). Piercing of one surface through the other defines a threading.

Physicists at the University of Vienna in collaboration with the Max Planck Institute for Polymer Research have discovered a new type of glass formed by long, cyclic molecules. The scientists successfully demonstrated that by making parts of the rings more mobile, the rings become more strongly entangled and the molecular fluid glassifies. The novel “active topological glass” is presented in the latest issue of Nature Communications.

Glass materials are ubiquitous in everyday life, ranging from window panes to porcelain espresso cups. Even PET plastic bottles, made of long polymeric molecules, are considered a form of glass. All these examples are produced by rapid cooling of a melt of particles, such as silica in case of windows or polymers in plastic bottles. Their unique properties, such as transparency or tensile strength arise from their microscopic disordered and tightly packed structure. While melted, the particles can move easily past each other or be rearranged by external forces as in glass blowing. However, when cooled down each particle becomes caged by its neighbours rendering the glass solid and resistant to deformation.

About twenty-five years ago, scientists conjectured that yet a new form of glass could exist if the constituent particles are long, flexible and, importantly, cyclic molecules. Such "rings" can thread each other, meaning one ring piercing through the eye of another ring, by which constraining each other’s motion. If many rings are threaded, for one of them to move away a number of other rings must un-thread sequentially to set it free. This takes very long to happen by random thermal fluctuations and therefore the conjectured disordered structure behaves effectively as a solid glass. In contrast to the hypothesis, such a glassy state of ring polymers has not been observed in experiments, possibly due to limited length of the ring polymers that is currently possible to synthesize. In computer simulations, the glass could be induced only by artificially immobilizing a fraction of all the rings in space. Then, naturally, the other rings threaded by the immobile ones could not move. Although appealing, the imposed immobilizing is unlikely to be achieved in practice. It seemed that a real "topological glass", a glass formed by strongly entangled cyclic molecules, remains elusive.

"We have taken the opposite approach to what has been attempted so far to find a topological glass. Rather than the nonphysical immobilizing of rings, in our simulations we made rings' segments more mobile. We achieve this by forcing parts of the rings to fluctuate more strongly", explains Iurii Chubak, together with Jan Smrek joint first authors from the University of Vienna. "The stronger-than-thermal fluctuations can be realized by incorporating molecular motors, molecules which locally exert forces on the expense of energy. Another option is the synthesis of rings containing segments with enhanced light absorption. Such actively driven rings then thread and entangle so extensively that they practically cannot move past each other. Remarkably, we observe the topological glass at experimentally accessible ring lengths and driving forces", says Jan Smrek, which carried out its work in cooperation with the Max Planck Institute for Polymer Research in Mainz and with support from the Lise Meitner Programme of the Austrian Science Fund FWF.

"This glass is microscopically very distinct from the material of the bottle you typically drink your favorite beverage from. More detailed properties of the active topological glass remain to be uncovered. However, it is already exciting. Not only from the fundamental physics point of view, but also due to the potential applications such as creating a fluid material with reversible vitrification upon light exposure", adds senior author Christos Likos from the Faculty of Physics.

Interestingly, the same basic physical ingredients as in the present active topological glass are found also in the nuclei of living eukaryotic cells. Indeed, the DNA fibers are long uncrossable polymers at high density with active driving due to various molecular motors. "We are aware of the similarities of our simulated system to the nuclei of living cells. However, if the DNA under living conditions could be in the state of the active topological glass, remains an open question", concludes Jan Smrek.