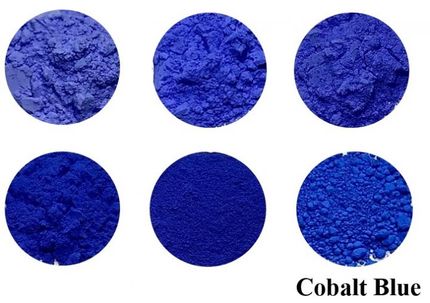 A new class of blue hibonite pigments has improved properties over existing colorants, such as cobalt blue.

Throughout history, people have sought vibrant blue pigments. The Egyptians and Babylonians used lapis lazuli 6,000 years ago. In 1802, a French chemist synthesized cobalt blue. More recently, in 2009 scientists discovered YInMn Blue, otherwise known as "Oregon Blue." But most of these pigments have limitations in terms of cost, stability, color or toxicity. Now, researchers in ACS Omega report a new class of 'cool' blue colorants that are inexpensive, durable and more environmentally friendly.

For the last 200 years, cobalt blue (CoAl2O4) has been a dominant commercial blue pigment because of its color intensity, ease of synthesis and versatility. However, 33% of the colorant by mass is carcinogenic Co2+, making cobalt blue relatively expensive and environmentally harmful to produce. Mas Subramanian, who discovered Oregon Blue, and colleagues at Oregon State University wanted to develop a new class of blue pigments that had enhanced color properties, reduced cost and lower cobalt content than cobalt blue.

The researchers were inspired by the crystalline structure of a light-blue mineral called hibonite. The team systematically substituted Al3+ (aluminum) ions in hibonite with Co2+, Ni2+ (nickel) or Ti4+ (titanium) ions. The resulting series of pigments showed a range of intense blue colors, some with reddish hues. The pigments were stable even when soaked in acidic or basic solutions. In contrast to cobalt blue, the new blues reflected near-infrared light, which could make them useful as 'cool pigments' in energy-saving, heat-reflecting coatings. Importantly, the Co2+ concentration in the new compounds in hibonite blues was as low as 4% by mass, making the pigments cheaper and more environmentally friendly.