Sartorius is set to grow further 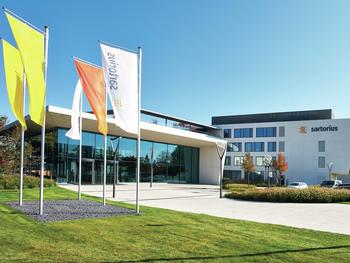 Sartorius has continued on its profitable growth track in fiscal 2019. The Group grew by double digits in sales revenue, order intake and earnings, recording gains in both divisions and across all regions.

According to preliminary figures, Group sales revenue rose in constant currencies by 14.8% (reported: +16.7%) to 1,827.0 million euros. Growth was almost entirely organic as the acquisition of the cell culture media specialist Biological Industries completed in December 2019 contributed only marginally to this increase. Order intake also rose by 14.8% in constant currencies (reported: +16.7%) to 1,939.5 million euros.

“In view of revenue, earnings and jobs, Sartorius developed very dynamically again in 2019 and even better than expected at the beginning of the year. We were also successful in expanding our portfolio and in adding further key technologies through the acquisition of Biological Industries,” said CEO Dr. Joachim Kreuzburg. “For Sartorius, 2020 will be a special year, not only because of our 150-year company anniversary. We aim to further grow profitably and reach the two-billion-euro mark in consolidated sales for the first time, as we had already announced in 2012 in our mid-term forecast for 2020.”

Underlying EBITDA rose overproportionately again relative to sales by 22.4% to 495.8 million euros; the respective margin was 27.1% (previous year: 25.9%) in line with our guidance. As expected, slightly less than one percentage point of this increase was attributable to the IFRS 16 Standard required to be applied for the first time in 2019. Relevant net profit rose by 19.2% from 175.6 million euros a year ago to 209.3 million euros, yielding earnings per ordinary share of 3.06 euros (PY: 2.56 euros) and earnings per preference share of 3.07 euros (PY: 2.57 euros).

Following the further expansion of our workforce in customer-facing functions, research and development, as well as operations, the number of Group employees rose significantly again by 11% or 900 people to 9,016.

Business development in the regions

All regions grew faster than in the previous year, contributing to the positive development of the Sartorius Group. EMEA (Europe, Middle East and Africa) increased its revenue by 11.2% to 733.4 million euros, accounting for 40% of the Group’s consolidated sales. The Americas region contributing around 35% to Group revenue achieved a 17.4% increase in sales to 629.9 million euros. In Asia | Pacific, Sartorius earned sales of 463.7 million euros (+17.4%), which equates to a share of around 25% of Group revenue.

(All growth rates for the regions are in constant currencies.)

The Sartorius Group continued to make substantial investments in expanding its global capacity, even though, as expected, its CAPEX ratio decreased upon the completion of several large projects to 12.3% (PY: 15.2%). Due to strong net cash flow from operating activities and despite the intensive investment activity and successful acquisition, the company’s ratio of net debt to underlying EBITDA was 2.0 and thus below the prior-year figure of 2.4. Equity rose from 973.4 million euros to 1,081.2 million euros at year-end. In connection with IFRS 16, the equity ratio decreased slightly from 38.5% as of December 31, 2018, to 38.0%. Sartorius therefore continues to have a very sound balance sheet and financial base.

The Bioprocess Solutions Division that offers a wide array of innovative technologies for the manufacture of biopharmaceuticals exceeded its already strong prior-year performance, increasing its sales revenue in constant currencies by 18.1% (reported: +20.0%) to 1,372.1 million euros. This gain was fueled by ongoing strong demand across all product categories, particularly in project business in Asia. The division’s order intake rose significantly as well by 18.0% (reported: +19.9%) to 1,479.3 million euros.

Underlying EBITDA for Bioprocess Solutions increased overproportionately to sales by 24.5% to 406.8 million euros. The division’s respective margin rose due to economies of scale and as a consequence of the change in IFRS 16, from 28.6% to 29.6%.

The Lab Products & Services Division that specializes in technologies and products for laboratories in the pharma sector and in life science research showed robust performance in a partly challenging economic environment, achieving sales growth of 5.9% (reported: +7.5%) to 454.9 million euros. The division’s order intake increased by 5.7% (reported: +7.3%) to 460.3 million euros.

Underlying EBITDA for Lab Products & Services rose year over year by 14.0% to 89.0 million euros. The corresponding margin was positively affected by IFRS 16 and stood at 19.6%, up from the previous year’s level of 18.5%.

(All growth rates for sales revenue and order intake are given in constant currencies.)

Sartorius projects that it will increase Group sales in fiscal 2020 on the basis of constant currencies by 10% to 13%, with the acquisition of Biological Industries, completed at the end of 2019, expected to contribute approx. 1.5 percentage points to this growth. Regarding profitability, Sartorius forecasts that its underlying EBITDA margin will increase year over year from 27.1% to about 27.5%. The ratio of capital expenditures (CAPEX) to sales revenue is expected to be around 10% (PY: 12.3%).

For the Bioprocess Solutions Division, the Executive Board projects sales growth of 11% to 14%, with consolidation of Biological Industries expected to contribute about one percentage point to this gain. With respect to the division’s underlying EBITDA margin, management assumes that it will increase to around 30.0% (PY: 29.6%).

The Lab Products & Services Division will likely increase its sales revenue by 7% to 10%, with Biological Industries projected to contribute around 2.5 percentage points to growth. For this division, the underlying EBITDA margin is forecasted at around 20.0% (PY: 19.6%).

The above forecast does not consider the acquisition of parts of Danaher’s life science portfolio, which was announced on October 21, 2019, and is currently undergoing antitrust clearance. Following the closing of this transaction, presently expected around the end of the first quarter of 2020, management will update its full-year guidance accordingly.

All forecasts are based on constant currencies, as in the past years.