First view of hydrogen at the metal-to-metal hydride interface 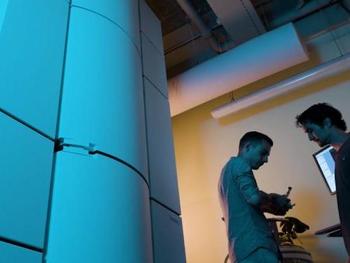 This picture shows the new TEM from Thermo Fisher Scientific at the University of Groningen.

University of Groningen physicists have visualized hydrogen at the titanium/titanium hydride interface using a transmission electron microscope. Using a new technique, they succeeded in visualizing both the metal and the hydrogen atoms in a single image, allowing them to test different theoretical models that describe the interface structure. The results were published in Science Advances.

To understand the properties of materials, it is often vital to observe their structure at an atomic resolution. Visualizing atoms using a transmission electron microscope (TEM) is possible; however, so far, no one has succeeded in producing proper images of both heavy atoms and the lightest one of all (hydrogen) together. This is exactly what University of Groningen Professor of Nanostructured Materials Bart Kooi and his colleagues have done. They used a new TEM with capabilities that made it possible to produce images of both titanium and hydrogen atoms at the titanium/titanium hydride interface.

The resulting pictures show how columns of hydrogen atoms fill spaces between the titanium atoms, distorting the crystal structure. They occupy half of the spaces, something which was predicted earlier. 'In the 1980s, three different models were proposed for the position of hydrogen at the metal/metal hydride interface,' says Kooi. 'We were now able to see for ourselves which model was correct.'

To create the metal/metal hydride interface, Kooi and his colleagues started out with titanium crystals. Atomic hydrogen was then infused and penetrated the titanium in very thin wedges, forming tiny metal hydride crystals. 'In these wedges, the numbers of hydrogen and titanium atoms are the same,' Kooi explains. 'The penetration of hydrogen creates a high pressure inside the crystal. The very thin hydride plates cause hydrogen embrittlement in metals, for example inside nuclear reactors.' The pressure at the interface prevents the hydrogen from escaping.

Producing images of the heavy titanium and the light hydrogen atoms at the interface was quite a challenge. First, the sample was loaded with hydrogen. It should subsequently be viewed in a specific orientation along the interface. This was achieved by cutting properly aligned crystals from titanium using an ion beam and making the samples thinner - to a thickness of no more than 50 nm - again using an ion beam.

The visualization of both titanium and hydrogen atoms was made possible by several innovations that were included in the TEM. Heavy atoms can be visualized by the scattering that they cause of the electrons in the microscope beam. Scattered electrons are preferably detected using high-angle detectors. 'Hydrogen is too light to cause this scattering, so for these atoms, we have to rely on constructing the image from low-angle scattering, which includes electron waves.' However, the material causes interference of these waves, which has so far made the identification of hydrogen atoms almost impossible.

The waves are detected by a low-angle bright-field detector. The new microscope has a circular bright-field detector that is divided into four segments. By analyzing differences in the wavefronts detected in opposing segments and looking at the changes that occur when the scanning beam crosses the material, it is possible to filter out the interferences and visualize the very light hydrogen atoms.

'The first requirement is to have a microscope that can scan with an electron beam that is smaller than the distance between the atoms. It is subsequently the combination of the segmented bright-field detector and the analytical software that makes visualization possible,' explains Kooi, who worked in close collaboration with scientists from the microscope's manufacturer, Thermo Fisher Scientific, two of whom are co-authors on the paper. Kooi's group added various noise filters to the software and tested them. They also performed extensive computer simulations, against which they compared the experimental images.

The study shows the interaction between the hydrogen and the metal, which is useful knowledge for the study of materials capable of storing hydrogen. 'Metal hydrides can store more hydrogen per volume than liquid hydrogen.' Furthermore, the techniques used to visualize the hydrogen could also be applied to other light atoms, such as oxygen, nitrogen or boron, which are important in many nanomaterials. 'Being able to see light atoms next to heavy ones opens up all kinds of opportunities.'