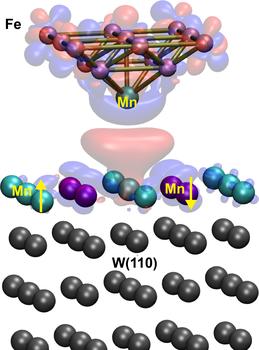 Simulation of the exchange interaction between the pyramidal magnetic tip, which consists of iron (Fe) atoms and terminates with a manganese (Mn) apex atom, and the surface. The surface consists of an atomic layer of manganese (Mn) atoms with “atomic bar magnets” pointing upwards (↑) or downwards (↓). The manganese layer rests on the surface of a tungsten crystal (W(110)). Red and blue isosurfaces show the interaction between electron densities of tip and surface atoms. 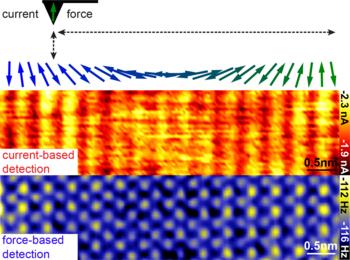 Upper panel: Sketch of the measurement scheme. Using an atomically sharp and magnetic tip (triangle with green arrow), the exchange force and tunnel current between the ferromagnetic tip and the cycloidal magnetic spiral in a single-atom manganese film is detected. The blue and green arrows indicate the direction of the magnetic moments of the atoms (atomic “bar magnets”) at the surface. Lower panel: Combined force- and current-based detection of the magnetic spiral structure. In the force map (blue-yellow color code) the surface atoms appear at different contrast levels due to the magnetic structure. The scale bar in the lower right corner shows the length scale (0.5 nm = 0.5 nanometers).

Today, there is a great effort to scale down magnetic memory towards nanometer-sized bits in order to ultimately store information in a single magnetic atom. This makes it necessary to image magnetic properties on the atomic scale. At the heart of magnetism is the exchange interaction – proposed by Werner Heisenberg in 1926 based on quantum mechanics – which aligns the “bar magnets” of single atoms. Utilizing a novel type of microscope allowing to measure forces and currents on magnetic surfaces and first-principles quantum mechanical calculations, scientists from Nijmegen and Kiel have now reported on ultra-high magnetic resolution of a magnetic spiral structure and quantification of exchange interactions at the atomic scale.

In the 1980’s Gerd Binnig and Heinrich Rohrer developed at the IBM research center in Rüschlikon in Zurich the scanning tunneling microscope for which they were later awarded the Nobel prize. In this instrument a sharp metallic tip is brought to a distance of about half a nanometer above a surface. At this tiny separation a small tunnel current flows between tip and surface. By scanning the tip across the surface this allows to resolve the atomic structure of surfaces. If a magnetic metallic tip is used even magnetic properties become accessible. However, the current is sensitive to numerous other signals which strongly convolute the magnetic information.

On the other hand, there is also a force acting between the atoms of the tip and those of the surface. If both tip and surface are magnetic, this force includes the Heisenberg exchange interaction. Recently, researchers around Professor Alexander Khajetoorians and Dr. Nadine Hauptmann from the Dutch Radboud University in Nijmegen developed a novel microscope which allows to measure the magnetic contributions to the current and force simultaneously.

In their present work, the researchers from the Radboud University and Kiel University, Germany, present unprecedent high-resolution imaging and quantify the exchange force field between a ferromagnetic tip and a chiral magnetic spiral structure. “With our new technique we could show that the force measurements are more sensitive to atomic-scale variations of the exchange force field and the local chemical environment than the current,” says Dr. Nadine Hauptmann.

First-principles quantum mechanical calculations performed on the super computers of the Northern German Supercomputing Alliance (HLRN) explain the experimental observations. “Our calculations show that the last atom at the tip plays a crucial role for the obtained exchange forces and reveal a competition of different exchange mechanisms,” as Dr. Soumyajyoti Haldar from Kiel University points out.

Their work creates a new state of the art in high-resolution imaging of complex magnetic structures, and demonstrates that exchange interactions can be quantified on the atomic scale. In the future the approach will allow to study single magnetic atoms or magnetic molecules.