The winners of the innovation award “Best CO2 Utilisation 2020” 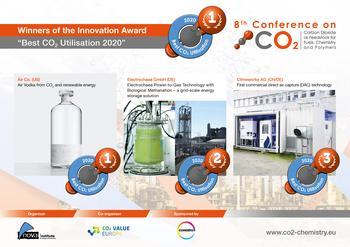 At nova-Institute’s first online conferences on PtX and Carbon Capture and Utilization (CCU), 50 speakers presented and discussed the future of aviation fuels and carbon dioxide as feedstock!

In the face of the current crisis, nova-Institute decided to defy the circumstances and found a new format for its events: The “1st European Summit on CO2-based Aviation Fuels“ (in cooperation with IASA) and the “8th Conference on Carbon Dioxide as Feedstock for Fuels, Chemistry and Polymers“ took place as a three-day online conference. The conference featured major topics such as policy and innovation, renewable carbon and renewable energy, carbon capture, electrochemistry, hydrogen production, CO2 for chemicals, kerosene and fuels, and polymers.

Physicist Michael Carus, founder and CEO of organizer nova-Institute, a science-based research and consultancy company, on the innovation award winner and the outcome of the conference: “The winning product, a vodka made from CO2 and renewable energy, will not be able to save the climate. But ethanol made from CO2 and renewable energy has a significantly lower carbon, land and water footprint than ethanol made from biomass. Ethanol from biomass requires a much larger area of land, fertilisers and pesticides, and the agricultural and fermentation processes even emit CO2. But even more importantly, Air Vodka demonstrates lively and in an understandable way to politicians and the public what can be done with CO2 and renewable energies. And that is so important. The conference showed impressively that in just a few years large quantities of kerosene, fuels and standard chemicals and polymers can be produced from CO2 and solar, wind or hydro power – instead of fossil fuels. Several companies, including large ones, are in the starting blocks. Only a few political decisions are needed to achieve a breakthrough. The technologies to end the fossil age are ready!”

One highlight of the conference was the innovation award “Best CO2 Utilisation 2020”. Six new technologies and products from four different countries had been selected out of 13 applications. After short presentations of all nominees, the three winners were elected online by the participants of the “8th Conference on Carbon Dioxide as Feedstock for Fuels, Chemistry and Polymers”.

The innovation award was sponsored by Covestro and organised by nova-Institute and CO2 Value Europe.

The innovation award “Best CO2 Utilisation 2020” went to Air Co. (USA) for their Air Vodka from CO2 and renewable energy. The second winner was Electrochaea (Germany), presenting their Power-to-Gas technology with biological methanation as a grid-scale energy storage solution, and the third winner was Climeworks with their direct air capture (DAC) technology.

Air Co., an organisation that created the world’s first ever carbon negative spirits. Utilising ground-breaking, proprietary technology to transform carbon dioxide into the purest, highest quality and most sustainable alcohol on the planet, Air Co. improves the air we breathe every day. With core inputs of only carbon dioxide, water and renewable electricity, Air Co.’s production method actively helps prevent climate change by removing the most abundant greenhouse gas from our planet (CO2) and turning it into ultra-high purity alcohol. The first application is the world's first carbon negative spirit, Air Vodka.

Climeworks captures CO2 from air with the world’s first commercial direct air capture (DAC) technology. The Climeworks DAC plants capture CO2 with a filter and are powered solely by either waste or renewable energy. They play an important role in the production of fuels from air-captured carbon dioxide and green power. A new facility on the premises of Karlsruhe Institute of Technology (KIT) combines all four steps required to produce synthetic fuels from air and green power in the project “Kopernikus”. Climeworks DAC technology secures the supply of CO2 from air. Through electrolytic splitting, Fischer-Tropsch synthesis and hydrocracking, the production of synthetic fuel is proven. This way, fuels of high energy density can be used in a carbon-neutral way and green power can be stored.