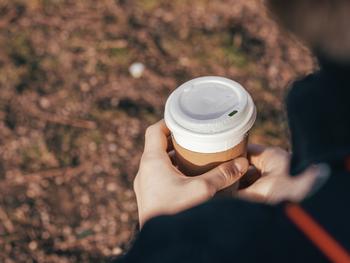 Photo by Paul Siewert on Unsplash

A faster, more efficient way of recycling plant-based "bioplastics" has been developed by a team of scientists at the Universities of Birmingham and Bath.

The team has shown how their chemical recycling method not only speeds up the process, it can also be converted into a new product - a biodegradable solvent - which can be sold for use in a wide variety of industries including cosmetics and pharmaceuticals.

Bioplastics, made from polylactic acid (PLA), are becoming increasingly common in products such as disposable cups, packaging materials and even children's toys. Typically, once they reach the end of their useful life, they are disposed of in landfill or composted, biodegrading over periods of up to several months.

In a new study, researchers have shown that a chemical process, using a zinc-based catalyst developed at the University of Bath and methanol, can be used to break down real consumer plastics and produce the green solvent, called methyl lactate.

The team tested their method on three separate PLA products- a disposable cup, some 3D printer waste, and a children's toy. They found the cup was most easily converted to methyl lactate at lower temperatures, but even the bulkier plastic in the children's toy could be converted using higher temperatures. "We were excited to see that it was possible to obtain high quantities of the green solvent regardless of samples' characteristics due to colorants, additives, sizes and even molecular weight.", said lead author Luis Román-Ramírez of the University of Birmingham's School of Chemical Engineering.

Lead researcher Professor Joe Wood, at the University of Birmingham, says: "The process we've designed has real potential to contribute to ongoing efforts to reduce the amount of plastic going into landfill or being incinerated creating new valuable products from waste.

"Our technique breaks down the plastics into their chemical building blocks before 'rebuilding' them into a new product, so we can guarantee that the new product is of sufficiently high quality for use in other products and processes."

The chemical process has been tried up to 300 ml, so next steps would include scaling up the reactor further before it can be used in an industrial setting.