Superworms digest plastic, with help from their bacterial sidekicks

Polystyrene waste to break down with enzymes or bacteria? 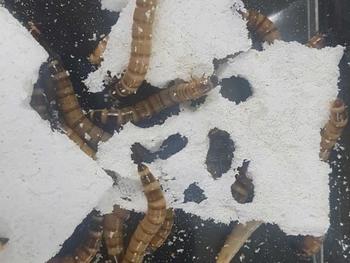 Bacteria from the gut of superworms can degrade polystyrene (white material).

Resembling giant mealworms, superworms (Zophobas atratus) are beetle larvae that are often sold in pet stores as feed for reptiles, fish and birds. In addition to their relatively large size (about 2 inches long), these worms have another superpower: They can degrade polystyrene plastic. Now, researchers reporting in ACS' Environmental Science & Technology have linked this ability to a strain of bacteria that lives in the larvae's gut.

Polystyrene is used in packaging containers, disposable cups and insulating materials. When thrown in landfills or littered in the environment, the plastic takes several hundred years to completely break down. Recently, several studies have found that mealworms and superworms can ingest and degrade polystyrene within a few weeks. In mealworms, this ability was linked to a certain strain of polystyrene-degrading bacteria in the worms' gut. Jiaojie Li, Dae-Hwan Kim and colleagues wanted to search for similar bacteria in superworms.

The team placed 50 superworms in a chamber with polystyrene as their only carbon source, and after 21 days, the worms had consumed about 70% of the plastic. The researchers then isolated a strain of Pseudomonas aeruginosa bacteria from the gut of the worms and showed that it that could grow directly on the surface of polystyrene and break it down. Finally, they identified an enzyme from the bacteria, called serine hydrolase, that appeared to be responsible for most of the biodegradation. This enzyme, or the bacteria that produce it, could someday be used to help break down waste polystyrene, the researchers say.