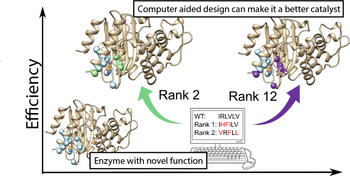 Building on ancient protein structures, it is possible to create enzymes for new chemical reactions and use bioinformatic computation to improve them.

A research team at Uppsala University has resurrected several billion-year-old enzymes and reprogrammed them to catalyse completely different chemical reactions than their modern versions can manage. The method can be used to develop sustainable solutions within biotechnology, such as for enzyme bioreactors or to chemically degrade environmental toxins.

"We use software to simulate billions of years of evolution, and we were actually able to develop an effective enzyme that can catalyse a completely new reaction. It's incredibly exciting," says Lynn Kamerlin, who is leading the research team at Uppsala University.

Enzymes have the ability to catalyse, i.e. speed up, challenging chemical reactions from millions of years to a fraction of a second without being consumed themselves. They are also biodegradable and have a minimal carbon footprint. Most enzymes are catalysts for a specific chemical reaction, which serves an important function in biological processes, for example in our bodies.

Within biotechnology, intensive work is being done to develop new enzymes that can catalyse unusual reactions for green chemistry, sustainable catalysis and the chemical breakdown of environmentally toxic substances.

The research team at Uppsala University has worked with colleagues at Universidad de Granada in Spain to resurrect ancestral enzymes, first on a computer, and then in the laboratory. The primitive enzymes have many characteristics that are desirable within biotechnology. They can withstand extreme temperatures and they are structurally more flexible, making them easier to modify than their modern equivalents.

The researchers succeeded in repurposing ancient antibiotic-degrading enzymes to catalyse a completely new non-natural reaction. But even though the repurposed enzymes sped up the reaction significantly, it was much slower than most naturally occurring enzymes.

Therefore, to improve the efficiency of the enzyme, the researchers used powerful computers to calculate what changes in the structure would result in a faster reaction. They used a new method called FuncLib, which uses a combination of evolutionary information and calculations of protein stability, to predict more effective enzyme variants.

A total of 3,000 potential new enzyme variants were predicted by FuncLib and the 20 most promising of these were tested in the lab. Of these, four were much faster than the original enzyme. The best was as effective as the average modern, naturally occurring enzymes.

"Our study shows that it is possible to design new, effective enzymes for a more sustainable future," says Lynn Kamerlin.