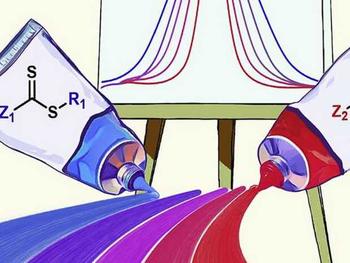 Symbolic representation of how the dispersity of a plastic can be controlled by mixing two catalysts (paint tubes).

ETH researchers have developed a new method for producing polymers with different lengths. This paves the way for new classes of polymer materials to be used in previously inconceivable applications.

It is hard to imagine everyday life without materials made of synthetic polymers. Clothes, car parts, computers or packaging – they all consist of polymer materials. Lots of polymers are present in nature, too, such as DNA or proteins.

Polymers are built on a universal architecture: they are composed of basic building blocks called monomers. Polymer synthesis involves linking monomers together to form long chains. Imagine threading glass beads onto a string and creating chains of different length (and weight).

An important industrial process for producing polymers is free radical polymerisation (FRP). Each year the chemical industry uses FRP to produce 200 million tonnes of polymers of various types, such as polyacrylic, polyvinyl chloride (PVC) and polystyrene.

Although this production method has many advantages, it also has its limitations. FRP produces an uncontrollable mixture of countless polymers of different lengths; in other words, its dispersity is high. Dispersity is a measure of how uniform or non-​uniform the length of the polymer chains in a material is. Material’s properties are determined to a large extent by this dispersity.

In the case of everyday polymers, polymers with both low and high dispersity are required. In fact, for many   high-​tech applications including pharmaceuticals or 3D printing, high dispersity can even be an advantage.

However, if chemists want to produce polymer materials with very specific properties, they must first and foremost be able to adjust the dispersity as desired. This lets them produce a wide range of polymer materials that either contain uniform polymer species, i.e. have a low dispersity, or are highly dispersed with a great number of polymers of different lengths. Until now, this has hardly been possible.

A group of researchers led by Athina Anastasaki, Professor of Polymer Materials at the Department of Materials Science, has now developed a method of controlling radical polymerisation, thus enabling researchers to systematically and completely control the dispersity of polymer materials.

In the past, in order to be able to control the radical polymerisation process at least to some extent, chemists would use a single catalyst. While this ensures that the resulting polymer chains become uniformly long, it doesn’t allow the overall dispersity to be controlled as desired.

Two catalysts do the trick

Now the ETH researchers simultaneously employ two catalysts with different effects – one is highly active, the other only slightly active. This enabled them to adjust the dispersity precisely as a function of the ratio in which they mixed the two catalysts. If the more active catalyst was more abundant, more uniform polymers were produced, which meant the resulting material had low dispersity. If, however, the less active catalyst was more abundant, a large number of different polymer molecules were formed.

This work means Anastasaki and her team have created a basis for the development of new polymer materials. In addition, their process is also scalable; it works not only in the laboratory, but also when applied to larger quantities of substances. Another advantage of this method is that even polymers with high dispersity can continue growing once the polymerisation process itself is complete – something that was previously considered impossible.

The high efficiency and scalability of the approach have already attracted interest from industry. Polymers produced with the new process could be put to use in medicine, vaccines, cosmetics or 3D printing.