An international paper went out in Physical Review B 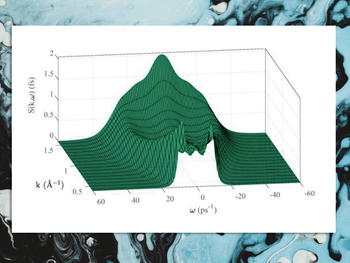 Co-author, Chair of the Department of Computational Physics of Kazan Federal University Anatolii Mokshin explains, "The key difference between the liquid state of matter and the solid state is the presence of shear stiffness in solids. In other words, solids can retain their shape in contrast to liquids and gases, which take the shape of the vessels in which they are placed. Together with our foreign colleagues, we found out that such an understanding is not entirely correct. We were able to obtain experimental confirmation of the presence of shear stiffness in a liquid. And this means that on a spatial scale comparable to the size of molecules and atoms, a liquid exhibits elasticity and rigidity, like a solid. This is very surprising. In particular, a liquid at these extremely small scales will respond to external deformation influences like an ordinary solid. The results are obtained for the case of gallium melt. However, they are true for any fluid."

The uniqueness of this work, according to the interviewee, is that for the first time a comprehensive study was carried out, including experiments on inelastic neutron scattering, large-scale molecular dynamics calculations performed by the Kazan University computer cluster and the supercomputer of the Interdepartmental Supercomputer Center of the Russian Academy of Sciences, and a theoretical explanation in the framework of the original self-consistent relaxation theory of the liquid state.

"New data are important for understanding a number of fundamental scientific questions related to liquid state physics. They must be taken into account when designing nanodevices, nanostructures and metamaterials. Firstly, it is now possible to more accurately evaluate the physical parameters of liquids near the solidification temperature and the conditions (temperature and pressure) under which nanostructures can be constructed. Secondly, new possibilities have appeared for controlling liquids confined by nanometer-sized structures. One of the branches of modern physics, nanofluidics, is studying these issues," concludes Mokshin.