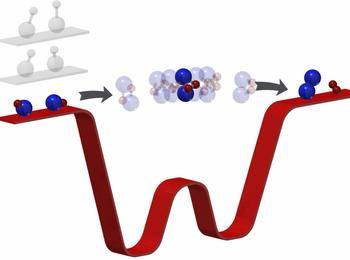 Harvard researchers discover that ultracold temperatures slow chemical reactions to sluggish speeds, gifting them with a glimpse of how molecules transform and insights into the quantum world.

In a famous parable, three blind men encounter an elephant for the first time. Each touches a part--the trunk, ear, or side--and concludes the creature is a thick snake, fan, or wall. This elephant, said Kang-Kuen Ni, is like the quantum world. Scientists can only explore a cell of this vast, unknown creature at a time. Now, Ni has revealed a few more to explore.

It all started last December, when she and her team completed a new apparatus that could achieve the lowest temperature chemical reactions of any currently available technology and then broke and formed the coldest bonds in the history of molecular coupling. But their ultracold reactions also unexpectedly slowed the reaction to a sluggish speed, gifting the researchers with a real-time glimpse of what happens during a chemical transformation. Now, though reactions are considered too fast to measure, Ni not only determined the lifetime of that reaction, she solved an ultracold mystery in the process.

With ultracold chemistry, Ni, the Morris Kahn associate professor of chemistry and chemical biology and of physics, and her team cooled two potassium-rubidium molecules to just above absolute zero and found the "intermediate," the space where reactants transform into products, lived for about 360 nanoseconds (still billionths of a second, but long enough). "It's not the reactant. It's not the product. It's something in-between," Ni said. Watching that transformation, like touching the side of an elephant, can tell her something new about how molecules, the foundation of everything, work.

But they didn't just watch.

"This thing lives so long that now we can actually mess around with it... with light," said Yu Liu, a graduate student in the Graduate School of Arts and Sciences and first author on their study published in Nature Physics. "Typical complexes, like those in a room-temperature reaction, you wouldn't be able to do much with because they dissociate into products so quickly."

Like Star Trek tractor beams, lasers can trap and manipulate molecules. In ultracold physics, this is the go-to method to capture and control atoms, observe them in their quantum ground state or force them to react. But when scientists moved from manipulating atoms to messing with molecules, something strange happened: molecules started to disappear from view.

"They prepared these molecules, hoping to realize many of the applications that they promise--building quantum computers, for example--but instead what they see is loss," Liu said.

Alkali atoms, like the potassium and rubidium Ni and her team study, are easy to cool down in the ultracold realm. In 1997, scientists won a Nobel Prize in Physics for cooling and trapping alkali atoms in laser light. But molecules are wonkier than atoms: They aren't just a spherical thing sitting there, said Liu, they can rotate and vibrate. When trapped together in the laser light, the gas molecules bumped against each other as expected, but some simply disappeared.

Scientists speculated that the molecular loss resulted from reactions--two molecules bumped together and, instead of heading off in different directions, they transformed into new species. But how?

"What we found in this paper answers that question," Liu said. "The very thing that you use to confine the molecule is killing the molecule." In other words, it's the light's fault.

"Basically, if you want to eliminate loss," Liu said, "you've got to turn off the light. You've got to find another way to trap these things." Magnets, for example, or electric fields can trap molecules, too. "But these are all technically demanding," said Liu. Light is just simpler.

Next, Ni wants to see where these complexes go when they disappear. Certain wavelengths of light (like the infrared the team used to excite their potassium-rubidium molecules) can create different reaction paths--but no one knows which wavelengths send molecules into which new formations.

They also plan to explore what the complex looks like at various stages of transformation. "To probe its structure," Liu said, "we can vary the frequency of the light and see how the degree of excitation varies. From there, we can figure out where the energy levels of this thing are, which informs on its quantum mechanical construct."

"We hope this will serve as a model system," Ni said, an example for how researchers can explore other low temperature reactions that don't involve potassium and rubidium.

"This reaction is, like many other chemical reactions, sort of a universe in its own," said Liu. With each new observation, the team reveals a tiny piece of the giant quantum elephant. Since there are an infinite number of chemical reactions in the known universe, there's still a long, long way to go.