Extraction and dissolution of Platinum atoms revealed by X-ray diffraction 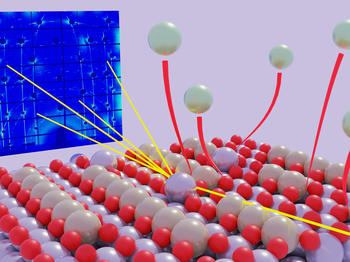 Extraction and dissolution of Platinum atoms revealed by X-ray diffraction.

Degradation of platinum, used as a key electrode material in the hydrogen economy, severely shortens the lifetime of  electrochemical energy conversion devices, such as fuel cells. For the first time, scientists elucidated the movements of the platinum atoms that lead to catalyst surface degradation.

For more than half a century, platinum has been known as one of the best catalysts for oxygen reduction, one of the key reactions in fuel cells. However, it is difficult to meet the catalysts' long-term high activity and stability needed for the massive deployment of the hydrogen technology in the transportation sector. Scientists led by Kiel University in collaboration with the ESRF (France), University of Victoria (Canada), University of Barcelona (Spain) and Forschungszentrum Jülich (Germany), have now found out why and how platinum degrades. “We have come up with an atomistic picture to explain it”, says Olaf Magnussen, professor at Kiel University and corresponding author of the article.

In order to achieve this, the team went to ESRF’s beamline ID31 to study the different facets of platinum electrodes in electrolyte solution.  They discovered how atoms arrange themselves and move on the surface during the processes of oxidation, the main reaction responsible for platinum dissolution.

The findings open doors to atomistic engineering: “With this new knowledge, we can imagine targeting certain shapes and surface arrangements of nanoparticles to enhance the stability of the catalyst. We can also find how the atoms move, so we could potentially add surface additives to suppress atoms moving the wrong way”, explains Jakub Drnec, scientist at beamline ID31 and co-author of the study.

The fact that the experiments took place under electrochemical conditions similar to what happens in the actual device was key to translate the findings into fuel cell technology. “Because platinum surface rapidly changes during oxidation, these measurements became possible only thanks to a new, very fast technique for surface structure characterization. This method, high-energy surface X-ray diffraction, has been co-developed at the ESRF” explains Timo Fuchs, from Kiel University and co-author of the study. “And it is, in fact, the only technique that can provide this kind of information in the real environment”, he adds. This is the first publication where atomic movements were determined by the technique under such conditions.

This research owes its success to the combination of the X-ray measurements at the ESRF with highly sensitive dissolution measurements performed at Forschungszentrum Jülich and advanced computer simulations. “Only such a combination of different characterization techniques and theoretical calculations provides a full picture of what goes on with the atoms at the nanoscale level in a platinum catalyst”, notes Federico Calle-Vallejo from University of Barcelona, in charge of the simulations.

The next step for the team is to continue experiments that provide insight into the degradation mechanisms of further model facets mimicking edges and corners on catalyst particles. These results will provide a map of platinum stability under reaction conditions and allow researchers to develop rational strategies for the design of more stable catalysts in the future.