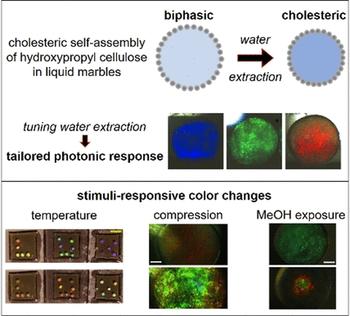 A surface displays structural colors when light is reflected by tiny, regular structural elements in a transparent material. Researchers have now developed a method to make structural colors from cellulose-based polymers by using coated droplets that exist in a surrounding fluid--so-called liquid marbles. The system readily responds to environmental changes, which makes it interesting for applications in bio-based sensors and soft photonic elements, according to the study published in the journal Angewandte Chemie.

Structural colors are a way to colorize a material without using a dye. Instead, the transparent material generates color through the regular arrangement of its molecules or other elements, as seen, for instance, in the ripples in the scales of colorful fish and butterflies, or in nanocrystals arranged at certain distances, as in the color-changing skin of chameleons.

Manos Anyfantakis and colleagues at the University of Luxembourg have identified a means to control the pitch, the distance of a full helical turn in a polymer, as a structural element on which reflection might occur and structural colors appear. Scientists can prepare liquid crystalline phases of biopolymers with pitches generating structural colors--called cholesteric phases--but these preparations depend on many parameters and need a long time to reach equilibrium.

Now, Anyfantakis and colleagues have discovered a faster and better controllable method, using liquid marbles as a platform for the controlled self-assembly of biopolymer-based structural colors. Liquid marbles are millimeter-sized droplets of liquid crystalline solutions, which are coated with nanoparticles. The coating protects the liquid from mixing with the outside fluid, but still allows for some interaction, dependent on the nature of both liquids.

In this case, the scientists prepared liquid marbles from an aqueous solution of hydroxypropyl cellulose--a modified cellulose polymer that orients itself in cholesteric phases--coated by silica nanoparticles. These cellulose-based liquid marbles were colorless at first, but allowing them to stay for some time in a defined volume of an organic solvent slowly brought about bright colors of red, green, and blue.

The colors were the result of a concentration change in the droplets, the authors found out. The organic solvent slowly extracted water from the liquid marbles, which caused the biopolymer to adopt a crystal form suitable for structural colors. Slowness and controllability were pivotal, the authors pointed out, because "this gives enough time for the polymer molecules to adjust to the concentration change, organizing with a new equilibrium pitch," they explained.

The method is elegant and simple, and the colors only depend on the volume of the organic solvent. The scientists also introduced external stimuli such as heat, pressure, or exposure to the chemicals and observed characteristic color shifts, corresponding to a varying pitch size. These shifts were reversible: when reapplying the normal conditions, the liquid marbles returned to their original colors, the authors observed.

The authors believe that the biopolymer-based liquid marbles could offer a route to synthesize cost-effective, environmentally friendly, and sustainable sensors.