Leaving oil behind and moving towards renewable raw materials: the chemical industry hopes to succeed in this with the help of microorganisms and enzymes 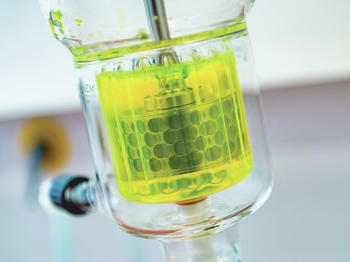 The enzyme reactor at close range: The enzymes do their work in the liquid.

The idea is that bacteria shouldn’t only convert waste products into valuable chemicals, but also draw energy from them. After all, they too can be reused for subsequent processes. This vision is what drives Professor Dirk Tischler, who heads the Microbial Biotechnology research group at Ruhr-Universität Bochum (RUB). His team is currently developing a process for producing ferulic acid, a platform chemical, from wood waste. Rubin, the RUB’s science magazine, published a report on his research.

The aim of so-called white biotechnology is to convert the production processes of various substances from crude oil, which is still in frequent use, to renewable raw materials. The researchers would prefer to use waste materials, for example wood waste from the furniture or paper industry. “Wood residues that can’t be used in paper production contain cellulose, whose sugar components are certainly suitable as an energy source for bacteria. In addition, wood residues also contain elements that can be used as starting material for substances that are interesting for industrial production,” explains Dirk Tischler. One example is vanillyl alcohol, from which the aroma vanillin can be derived.

Tischler’s research group is currently working on the development of a process in which lignin, a constituent of wood, is turned into ferulic acid, a platform chemical from which further substances can be produced. Specific enzymes take care of the conversion from one initial substance to another, namely one that is required and valuable. The first step has already been accomplished: in addition to a derivative product, some ferulic acid is also generated. However, the whole process is not yet efficient enough; the researchers hope to optimise it through genetic modification.

Using whole cells and recycling them as biomass

While the purified enzymes are used in the lab, industry works with whole cells into which the blueprint for the respective enzymes is introduced. Once the bacteria are used up after a production cycle, they can be reused as biomass. “This is our ultimate objective: moving away from the linear production processes of the past towards the reuse of all components,” concludes Dirk Tischler.