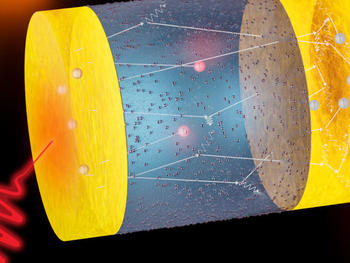 When heating a platinum layer on nanometer scales, heat can be transferred by hot electrons through a copper layer into a nickel layer without significantly heating the copper in between. This unusual form of heat transport was discovered by a research group around Jan-Etienne Pudell and Matias Bargheer from the Institute of Physics and Astronomy of the University of Potsdam, the Helmholtz-Zentrum Berlin für Materialien und Energie GmbH, and the Université de Lorraine. Their results were recently published in the scientific journal Advanced Functional Materials“.

Fascinating phenomena can occur with very thin metal composite structures in the nanometer range, as physicists from Germany and France have now discovered using ultrafast X-ray experiments. They observed that a platinum film only few atomic layers thick transfers heat to an underlying nickel film of comparable thickness. The nickel film heats up much more than the 100 nanometer thick copper layer in between, through which the heat is conducted. “If you stir hot soup with a metal spoon, you would be surprised if the spoon was hotter at the end than the middle” physicist Prof. Dr. Mathias Bargheer explains the phenomenon.

Laser experiments show that by heating the front end of the structure, the lattice of the back end is heated much more rapidly and efficiently than the middle part through which the heat is transported. At the time when the nickel lattice is maximally heated, no significant heat has entered the copper lattice. The transport through the copper layer is carried by hot electrons, which fly towards the nickel almost without collisions with the crystal lattice. The electrons are much more strongly coupled to the lattice motion in the nickel, which is why a lot of thermal energy is transferred locally into lattice vibrations there.

The findings were obtained with ultrafast X-ray diffraction experiments. Very short X-ray pulses are used in these experiments which combine a spatial resolution on an atomic scale with a time resolution in the femtosecond range, thus enabling direct measurements of changes in the structure of a crystal lattice. In contrast to optical experiments, X-rays can also be used to observe processes under reflective metal layers and to differentiate the developments in the individual components of a layer stack.