Dynamic, yet inertial – and definitely futuristic 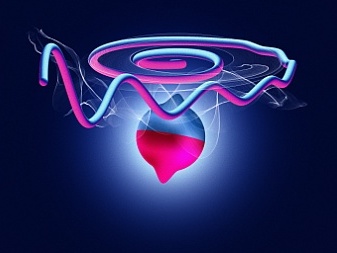 An international team of scientists has managed for the first time to observe the 'nutation' of spins in magnetic materials (the oscillations of their axis during precession).

In the journal Nature Physics, an international team of scientists from Germany, Italy, Sweden, and France report on their experimental observation of an inertial effect of electron spins in magnetic materials, which had previously been predicted, but difficult to demonstrate. The results are the outcome of one of the first long-term projects at the high-power terahertz light source TELBE at the Helmholtz-Zentrum Dresden-Rossendorf (HZDR).

Today, most of the world’s “memory” is stored on magnetic data carriers – hard disks – without which our digital lives would be unthinkable. In the magnetic material, it is the electron spins that do the actual job of storing the data. Imagine this spin as electrons rotating around their own axes, either to the left or right – representing the digital “zeros” and “ones”.

There is something special about this rotation, as Dr. Jan-Christoph Deinert from the HZDR Institute of Radiation Physics explains: “In the magnetic field, the electron behaves like a tumbling spinning top. The rotational axis of the electron changes its direction on a circular path. We call this process precession. When disturbed by an external force, the rotational axis should also make small oscillatory movements, called nutation, which overlap the precession. Like precession, it is a characteristic of many rotating objects, from children’s spinning tops to planets like Earth. Due to its much smaller scale, however, nutation is far more difficult to observe.”

The team has now successfully stimulated and measured the nutation of these spins in thin magnetic layers, like those used in hard disks. The nutation period was measured in the order of one picosecond, a thousandth of a billionth of a second. During their experiments, the physicists discovered that the nutation of the magnetic spin axis is 1,000 times faster than the comparatively slow change of direction of the precession motion, a ratio remarkably similar to that of Earth.

This discovery is an important piece of the hitherto surprisingly patchy puzzle of our understanding of ultrafast magnetic processes and thus a step towards even faster, more compact, and energetically more efficient data processing technologies. First, however, researchers must understand the underlying dynamics of processes that occur at time scales of trillionths of a second, including their inertial dynamics, as a source of nutational motion. “Until now, established mathematical models have assumed that there is some kind of built-in speed limit to such processes. But we are able to show that extremely fast effects, such as nutation, actually do occur and may therefore play an important role in dynamic data writing processes,” explains Nilesh Awari, who has been closely involved with the work as a PhD student and postdoc at HZDR.

“This is the first direct experimental proof of inertial motion of magnetic spins,” explains Italian physicist and team leader Stefano Bonetti, professor at the Universities of Venice and Stockholm and coordinator of an ERC (European Research Council) project on ultrafast magnetism. “Among other things, we expect our work to have an impact on data centers, which store almost all of humanity’s digital information, since inertial dynamics can play a major role, especially in ultrafast manipulations of spin orientation. Understanding the nutation period is becoming increasingly important as write speeds accelerate in ever faster data storage technologies. Our first observation of these movements paves the way for new technologies that help improve the efficiency of our daily digital lives – after all, these are the technologies with the steepest increase in energy consumption among all human activities.”

The experiments were a collaborative effort by scientists from several European laboratories (HZDR, TU Chemnitz, Universität Duisburg-Essen, Deutsches Zentrum für Luft- und Raumfahrt, TU Berlin, Institute Polytechnique de Paris, Ca' Foscari University of Venice, University of Naples Federico II, University of Naples Parthenope, and the University of Stockholm). The key measurements were performed at HZDR thanks to the special experimental environment it offers, as Jan-Christoph Deinert describes: “TELBE is able to generate the necessary intense terahertz radiation for the experiment in the frequency range between microwaves and infrared. Terahertz radiation acts as a highly intense magnetic pulse at the picosecond time scale, which cannot be achieved with conventional magnets.”

The group headed by Stefano Bonetti has been involved in the development and use of terahertz sources at TELBE from the very beginning. “The first experiments were difficult,” Bonetti recalls. “But after a few years, the machine performance had already become very powerful. The actual measurements on TELBE were conducted for more than a year across three different measurement campaigns in user operation to verify the reproducibility of this previously unobserved effect.”