Topology Gets Magnetic: The New Wave Of Topological Magnetic Materials 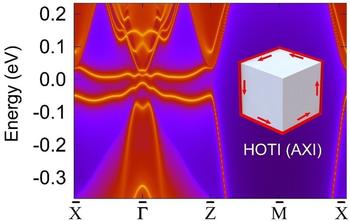 The boundary states of NpBi, an ideal magnetic topological insulator discovered in the present study.

The periodic table classifies elements by their chemical properties, such as the number of electrons or electronegativity. This classification has led to the prediction – and subsequent discovery - of new elements. Analogously, the electronic structures of nonmagnetic crystalline solids – collections of elements placed with regular spacings – have recently been classified through a “topological” periodic table based on the complete theories of Topological Quantum Chemistry and Symmetry-Based Indicators. Based on the topology of their electronic wavefunctions, tens of thousands of nonmagnetic topological materials have been identified, leading to the discovery of thousands of new topological insulators.

The relative absence of candidate magnetic topological materials can be attributed to the complicated symmetries of magnetic crystals, and to the theoretical and experimental difficulties involved in modeling and measuring quantum magnets.  First, while hundreds of thousands of known compounds are searchable by their crystal structure in established databases, there are only hundreds of experimentally measured magnetic structures available in the largest magnetic materials databases. Second, whereas the nonmagnetic structures are classified into only 230 space groups, magnetic materials are classified by the 1,421 magnetic space groups. “On top of this, in all magnetic systems, we must also worry about the effects of electron-electron interactions, which are notoriously difficult to model. This makes the task of predicting magnetic topological materials significantly more complicated, even if the numbers were more favorable,“ said B. Andrei Bernevig, a professor of physics at Princeton University and one of the authors of the present study which aims to remedy this problem.

In the study by Bernevig’s group, published in Nature, an international team of  researchers from the Max Planck Institute in Halle and Dresden, the University of the Basque Country in Bilbao, the IKERBASQUE Foundation for Science, the Donostia International Physics Center (DIPC), the CNRS and Ecole Normale Superieure in Paris, France; the Massachusetts Institute of Technology, the ShanghaiTech University in Shanghai, China, the University of Oxford, and Princeton University has taken a large step towards  the discovery of magnetic materials with nontrivial topological electronic properties.

“The classification and diagnosis of band topology in magnetic materials effectively closes the loop started 40 years ago in a field whose relevance has been reinforced by the Nobel Prizes in Physics in 1985 and 2016”, says author Claudia Felser, a director at the Max Planck Institute in Dresden.

In 2017, a team of researchers from Princeton University, the University of the Basque Country, Max Planck Institute, and the DIPC developed a new, complete understanding of the structure of bands in nonmagnetic materials. “In this theory -- Topological Quantum Chemistry (TQC) -- we linked the topological features a material to its underlying chemistry. This rendered the search for nonmagnetic topological materials into a form that could effectively be automated,” said Luis Elcoro, a professor at the University of the Basque Country in Bilbao and a co-author of both studies. TQC represents a universal framework for predicting and characterizing all possible band structures and crystalline, stoichiometric materials.  TQC was further applied to 35,000 experimentally established nonmagnetic compounds, leading to the discovery of 15,000 new nonmagnetic topological materials.

“We have identified thousands of topological materials in the last two years, whereas only a few hundred were previously identified over the last two decades. Prior to the application of these novel tools, the search for new materials with these astonishing properties was like looking for a needle in a haystack in twilight. Now, searching for nonmagnetic topological materials is almost a routine exercise” - said Maia Vergniory, an assistant professor at the IKERBASQUE Foundation for Science and the DIPC, and a co-author of both studies.

Present research has increasingly become focused on magnetic compounds. Very few magnetic materials have been theoretically proposed to host antiferromagnetic magnetic topological phases, and only a handful have been further confirmed experimentally. “A theory equivalent to TQC is needed to achieve comparable success in the study of magnetic materials.  However, because there are over a thousand magnetic symmetry groups to consider, the problem is essentially intractable by brute force,” said Benjamin Wieder, a postdoctoral researcher at the Massachusetts Institute of Technology and Princeton, and an author of the present study.

The researchers faced two main obstacles in reproducing the success accomplished with nonmagnetic materials: on the one hand, the theoretical machinery needed to analyze the band topology of a given magnetic material had to be elucidated. “We see the complete set of tools as a building. While the nonmagnetic materials represented a sturdy townhouse, the complete theory of magnetic materials was essentially an unfinished skyscraper” - said Zhida Song, a postdoctoral researcher at Princeton and an author of the new study. For topological material discovery, another problem is that the number of magnetic materials whose magnetic structure is known in reliable detail is rather small. “Whereas we had 200.000 nonmagnetic compounds to analyze, the largest database of experimentally measured magnetic structures has roughly 1,000 entries. Only in the last decade have scientists seriously attempted to classify and collect the structural data of these magnetic materials,” adds author Nicolas Regnault, a professor at the Ecole Normale Superieure, CNRS, and Princeton.

“Luckily, we had the assiduous work of the people behind the magnetic structures database of the Bilbao Crystallographic Server, which allowed us to input the correct initial data into our theoretical models” said Yuanfeng Xu, a postdoctoral researcher at the Max Planck Institute in Halle, and the first author of the current study. The magnetic information is hosted in the Bilbao Crystallographic Server, which is partially developed by Prof. Elcoro. After a selection of the best potential candidates, the team analyzed 549 magnetic structures by first applying ab-initio methods to obtain the magnetic symmetries of the electronic wavefunctions, and then building a magnetic extension of TQC to determine which magnetic structures hosted nontrivial electronic band topology. “In the end, we have found that the proportion of topological magnetic materials (130 out of 549) in nature appears to be similar to the proportion in nonmagnetic compounds” added Dr. Xu.

Despite the low absolute number of magnetic compounds relative to the thousands of nonmagnetic materials studied so far,  the authors have found an even larger diversity of fascinating characteristics. “The number of knobs for intriguing experimental studies, such as controlling topological phase transitions, seems to be larger in magnetic materials,” said Dr. Xu.  “Now that we have predicted new magnetic topological materials, the next step is to experimentally verify their topological properties,” added author Yulin Chen, a professor at Oxford and Shanghai Tech.

The researchers have also created an online database for freely accessing the results of the present study. Using different search tools, the users can explore the topological properties of the more than 500 analyzed magnetic structures. “We have laid the foundation of a catalogue of topological magnetic structures. The standardization of the use of magnetic symmetry in experimental and theoretical settings, accompanied by the widespread adoption of the tools developed in this work, is expected to lead to an even larger burst of discovery in magnetic topological materials over the coming years,” concluded Bernevig.