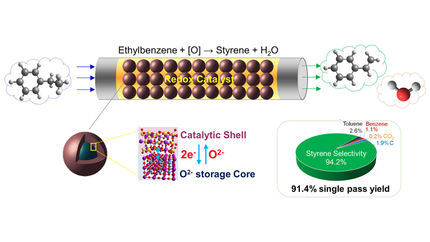 "Styrene is a synthetic chemical that is used to make a variety of plastics, resins and other materials," says Fanxing Li, corresponding author of the work and Alcoa Professor of Chemical Engineering at North Carolina State University. "Because it is in such widespread use, we are pleased that we could develop a technology that is cost effective and will reduce the environmental impact of styrene manufacturing." Industry estimates predict that manufacturers will be producing more than 33 million tons of styrene each year by 2023.

The conversion process takes place at 500-600 degrees Celsius - the same temperature range as conventional styrene manufacturing processes. However, there is a big difference.

"Current techniques require injecting very large volumes of steam into the reactor where the conversion takes place," says Yunfei Gao, a postdoctoral scholar at NC State and co-lead author of a paper on the work. "Our technique requires no steam. In practical terms, this drastically reduces the amount of energy needed to perform the conversion."

"These advances are made possible by the engineered design of the catalyst itself," says Xing Zhu, co-lead author of the paper and a researcher at the Kunming University of Science and Technology (KUST). "The new redox catalyst has a potassium ferrite surface for the catalytic phase and a mixed calcium manganese oxide core for lattice oxygen storage." Zhu worked on the project as a visiting scholar at NC State.

"In order to adopt the new catalyst, styrene manufacturers would need to adopt a different style of reactor than they are currently using," Li says. "They would need something similar to a CATOFIN® reactor. But those are already in widespread use for other industrial applications. And the cost savings from the new process should be significant."