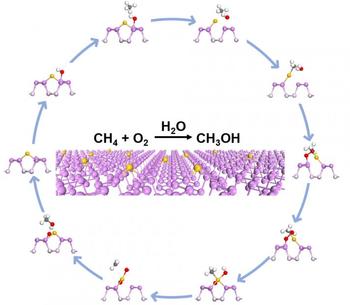 Schematic diagram of the reaction pathway for methane oxidation over Au1/BP nanosheets.

Advances in hydraulic fracturing technology have enabled discovery of large reserves of natural gas which primarily contains methane, which is mainly burned directly and causing global warming potentially. Upgrading methane to greener energy such as methanol through aerobic oxidation is an ideal way to solve the problem and remain 100% atom economy.

Yet the difficulties lie in activating methane and preventing methanol from over-oxidation. Methane takes a stable non-polar tetrahedral structure with high dissociation energy of C-H bond, which requires high energy to be activated. Meanwhile methanol can be easily over-oxidized to carbon dioxide during the process. The activation and directional transformation of methane is regarded as the "holy grail" of catalysis.

Au1/BP nanosheets was able to catalyze methane oxidation reaction with oxygen as oxidant under irradiation conditions. Based on mechanistic studies, water and O2 were activated on Au1/BP nanosheets to form reactive hydroxyl groups and * OH radicals under light irradiation. The reactive hydroxyl groups enabled mild oxidation of methane into CH3* species, followed by oxidation of CH3* via * OH radicals into methanol.

This study provides insight into the activation mechanism of oxygen and methane in methane selective oxidation, and offers a new understanding of the role of water in the reaction process.