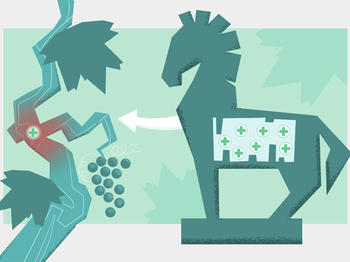 Every year, fungal diseases of grapevines cause a loss of one billion euros. Conventional plant protection agents are largely powerless in combating them. A planned spin-off of the Max Planck Institute for Polymer Research (MPI-P) is now to further develop research into sustainable, microtechnology-based plant protection products and bring them to market maturity. The path to the spin-off is supported by an EXIST start-up grant from the German Federal Ministry for Economic Affairs and Energy.

With their research on microcarrier-based crop protection agents, a team led by project manager Frederik Wurm, head of a group at the MPI-P and professor at the University of Twente, and mentor Katharina Landfester, director at the MPI-P, have been awarded an EXIST start-up grant from the German Federal Ministry for Economic Affairs and Energy. With three other team members, the lignin microcarrier technology developed at the institute will be further developed and brought to market over the next 1 ½ years. In total, the "Escape" project will be funded with approximately 800,000 euros.

The technology was developed over several years of research at the MPI-P. Porous spheres with a diameter in the range of a millionth of a meter are used for this purpose. These microcarriers consist of the substance "lignin", which is a component of wood and gives it its strength. They are loaded with a fungicide and injected into grapevines, for example. There they can be used effectively as a kind of "Trojan horse" against the so-called Esca disease. Esca is a fungal disease and attacks grapevines from the inside out. It decomposes the lignin, which takes away the trunk‘s strength - the vine thus dies. However, the injected microcarriers, which are also made of lignin, are also decomposed by the fungi: The "Trojan horse" is thus opened, which releases the fungicide and effectively combats the fungi.

The team of the spin-off includes an expert for the approval of the plant protection product, a viticultural technician and a business economist.