Many researchers are familiar with the problem: Before there are any new findings, there is an unknown measuring device

"SweepMe!" simplifies the use of measuring devices 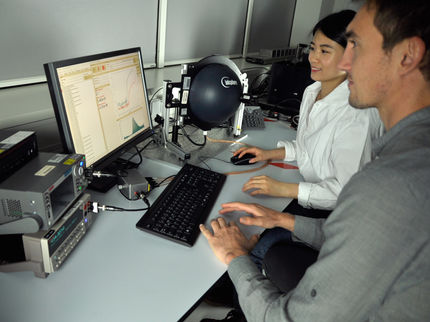 PhD students of the IAP

In order to control it, different libraries, protocols and command sets need to be followed. If you ever have to combine several devices from different manufacturers, you virtually have to take an additional course in computer science. This is because, in each case, a separate software is required for the special interaction.

Axel Fischer and Felix Kaschura were facing exactly the same problem when they did their doctoral studies at the Institute of Applied Physics (IAP) of TU Dresden. So they spontaneously developed a user-friendly solution for the hitherto complicated handling of measuring devices. They developed a software application that allows various devices to be assembled for a measurement with just some mouse clicks - initially for experiments in the field of organic electronics. Following the foundation of the "SweepMe!" company in 2018, they expanded their program to include other areas of research.

Fischer and Kaschura have now signed a cooperation agreement with TU Dresden. "All TUD members can download our 'SweepMe!' software and the additional modules free of charge during the term of the contract, and use it for an unlimited period of time," Fischer is pleased to say. "Moreover, the handover of device drivers which TUD employees create for our software will be significantly simplified. Transferring them to us is voluntary and can be realized via a simple form."

"We hope that the cooperation agreement will encourage a continuous exchange with the researchers at TUD, so that we will hear about current problems and develop appropriate solutions, which can then be tested and used at TUD," says Kaschura, looking to the future.

Thanks to the software developed by the two physicists, once the devices required for the measurements have been implemented, even users without much programming knowledge can create their own program sequences. "In contrast to the previous method, 'SweepMe!' addresses all measuring devices through modularly organized device driver files. Users can thus quickly click together new measurement sequences and use the same device drivers over and over again," Axel Fischer explains the principle.

The device drivers are provided to all users worldwide via the sweep-me.net open-source platform. In addition, users can also create their own device drivers. The cooperation agreement simplifies the transfer of device drivers to "SweepMe!", whilst avoiding them being developed twice at TU Dresden. Own content can thus be easily shared with other institutes.