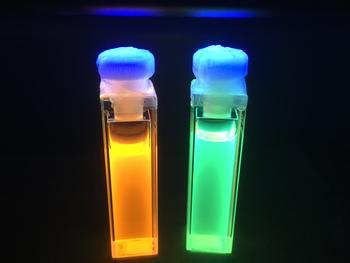 The dye added to the resin system changes colour when an alcohol that is released by the resin binds to it.

One day in the near future dyes in electric motors might indicate when cable insulation is becoming brittle and the motor needs replacing. Scientists at Martin Luther University Halle-Wittenberg (MLU), together with ELANTAS, a division of the specialty chemicals group ALTANA, have developed a new process that enables the dyes to be directly integrated into the insulation. By changing colour, they reveal how much the insulating resin layer around the copper wires in the motor has degraded.

Modern combustion engines have long had detectors that recognise, for example, when an oil change is needed, saving unnecessary inspections. Electric motors also show signs of wear. Inside, they are usually made up of tightly wound copper wires - and these in turn are coated with an insulating resin. “This insulation changes over time. It becomes brittle as it degrades dues to heat and chemical processes,” explains Professor Wolfgang Binder from the Institute of Chemistry at MLU. However, it is not possible to tell from the outside whether the insulation around the wires inside is still intact or whether the entire motor needs to be replaced.

The scientists from MLU were tasked with finding a solution to this problem on behalf of the ELANTAS division of ALTANA, which produces special resin systems for such insulation. “Until now, developers have focused on the degree to which material degrades under specific conditions,” explains Alexander Funtan, a chemist at MLU. Recommendations were then made as to how long it would take before a replacement would be necessary. However, the actual wear depends on the conditions under which it is used, most particularly temperature. Funtan therefore developed a test rig which he used to analyse four different resin systems over several months to determine which degradation products form at different temperatures.

He discovered that the four resin systems consistently released a specific alcohol under the different temperature conditions. “We then worked closely with the researchers and developers at ELANTAS to find a sensor molecule for this alcohol,” he says. In other words, a substance that is easily detectable and whose properties change when the alcohol binds to it. The sensor molecule must also withstand high temperatures and normal production processes. Another requirement was that it did not change the insulation’s electrochemical properties. The choice fell on a dye that normally glows reddish orange under UV light; but when alcohol binds to it, the colour spectrum shifts to a light green.

The different colour spectra could then be analysed using special devices that could be installed directly in the engine. “This way, you can see if a replacement is necessary without having to open up the engine,” says Binder. This will hopefully avoid unnecessary motor replacements in the future. The new insulation could be used in the motors of electric vehicles as well as in machines and other equipment. “These results reveal what can be achieved by combining basic university research with commercial application know-how,” says Dr Simon Rost, head of research & development at ELANTAS in Hamburg. “In the future, this will enable us to provide added value to our customers and further contribute to sustainable development.”

ELANTAS filed a patent for the new process at the beginning of the year. The research was financed by the specialty chemicals group ALTANA and also funded within the EU’s BAT4EVER project as part of the “Horizon 2020” programme.