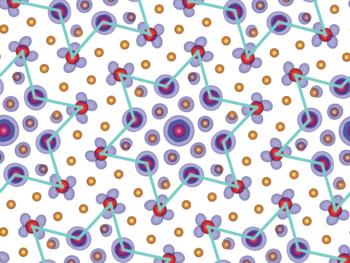 The geometry of 1T-TaS₂, with Ta atoms in red, S atoms in orange and the charge density wave (blue isosurface) highlighted by the hexagonal star shape.

Researchers at the Max Planck Institute for the Structure and Dynamics of Matter (MPSD) in Hamburg and the Ulsan National Institute of Science and Technology (UNIST) in South Korea have found that the existing method to calculate a particular insulating state produces errors and suggest a new approach instead.

Though they both consist only of H₂O molecules, water and ice exhibit apparently distinct characters: The former is solid and the latter is the very indispensible liquid for all living creature. Likewise, many materials of a given constituent in nature can exhibit different phases. Diamond and graphite are good examples. Both are made up of carbon atoms, but the former is transparent and electrically insulating while the latter looks black and conducts electricity.

Many branches of condensed matter theory have focused on the phases of materials, or on phase variations of a given material. In so-called ‘phase changing materials’ the different phases can be accessed by a change in temperature or pressure. The transition metal dichalcogenide TaS₂ is one of these fascinating examples. It can adopt various different material states, including the superconducting state, the normal conducting state, and insulating properties. The debateover its low temperature (T < 200K) state continues, however, with many experimentalists reporting that TaS₂ is an insulator in the low temperature phase, but many theorists claiming that it must be in a metallic state.

Quantum mechanics theories can yield an exact understanding whether a given material is insulating or metallic. In a quantum mechanical state of a material, such as a diamond, all electrons are tightly bound to the atoms and they have no path to move onto other atoms. On the other hand, like the conducting electrons in graphite, the electrons have a well-developed path through which the charge can be transported. Around 80 years ago, the physicists Mott and Peierls found that there are many other subtle reasons that cause the material to be insulating. For example, in the insulating mechanism suggested by Mott, the well-developed path can be disconnected by unusual electron-electron correlations - unlike in normal insulators like diamonds. For the low-temperature state of TaS₂, several scientists have suggested that it is a Mott-type insulator, while some others have claimed that it must be a metal.

In Mott insulators, electron transport is stalled, just like in a traffic jam. This phenomenon is well understood within the framework of density functional theory (DFT) - a mathematical procedure that deals with the quantum mechanics of many-electron system. Scientists combine DFT and another parameter called the Hubbard-type U potential to calculate how the electron transport traffic jam is caused.

However, now a research team from the MPSD and UNIST has found that combining DFT and the Hubbard-type U potential can easily lead to erroneous results, particularly for the charge density wave (CDW) phases of ‘phase changing materials’, like 1T-TaS₂. The team closely examined this mathematical procedure underlying this method.

Lead author Dongbin Shin says: "We know that, in the low temperature phase, the CDW state produces the reconstruction in the hexagonal star pattern. In this CDW state, the Hubbard-type U potential must be accommodated on this star pattern. We have found, though, that the application of the U potential onto the atomic site and not on the star pattern leads to a substantial error in the calculation of Mott insulating state. This is significant for the correct description of the Coulomb interaction between CDW states.“

The team’s study may not only solve the long-standing problem relating to the Mott insulating state of 1T-TaS₂, but also suggests the generalized Hubbard U-type potential approach to describe the Mott insulator in the CDW phase and to correct the on-site Coulomb interaction in molecular solids.