The expected recovery of the ozone layer may fail to happen anytime soon, if global warming is not slowed down 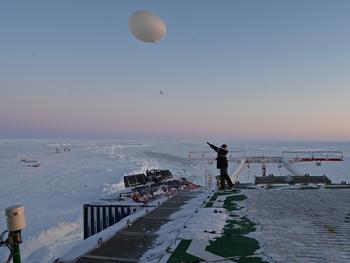 In spring 2020, the MOSAiC expedition documented an unparalleled loss of ozone in the Arctic stratosphere. As an evaluation of meteorological data and model-based simulations by the Alfred Wegener Institute, Helmholtz Centre for Polar and Marine Research (AWI) now indicates, ozone depletion in the Arctic polar vortex could intensify by the end of the century unless global greenhouse gases are rapidly and systematically reduced. In the future, this could also mean more UV radiation exposure in Europe, North America and Asia when parts of the polar vortex drift south. With their new findings, the experts call into question the commonly held assumption that, thanks to the ban on the production of chlorofluorocarbons (-CFCs), ozone loss would grind to a halt in just a few decades. The AWI study was jointly conducted with the University of Maryland and the Finnish Meteorological Institute, and has now been published online in the science magazine Nature Communications.

On 12 October 2020, when Polarstern returned to Bremerhaven from MOSAiC – the largest Arctic expedition in history – she brought with her troubling news: broad expanses of open water to the north of Greenland, and sea ice riddled with meltwater pools at the North Pole, bore witness to the dramatic effects of global warming that could already be seen in the Arctic. But the rapid melting wasn’t the only thing that worried Expedition Leader Markus Rex: “Readings taken during the expedition showed that the chemical loss of ozone over the Arctic in the spring of 2020 was worse than ever before. A comprehensive analysis has now determined that this was also due to climate change. Unfortunately, our work indicates that, if climate change continues unchecked, loss of ozone over the Arctic will likely continue to worsen through the end of the 21st century, despite the global ban on ozone-destroying substances.” During MOSAiC, at the altitude range of maximum ozone concentration, approx. 95% of the ozone had been destroyed. As a result, the thickness of the ozone layer was reduced by more than half, even though the concentration of ozone-destroying substances has declined since the turn of the millennium – a success of the international efforts to protect the ozone layer.

Does that mean the ozone layer – a protective barrier against harmful UV radiation – over the Arctic is increasingly at risk?

To find the answer, a team led by the AWI experts Peter von der Gathen and Markus Rex, and by Ross Salawitch from the University of Maryland, compared the data from 53 computer models created in the context of the international “Coupled Model Intercomparison Project Phases 5 and 6” (CMIP5, CMIP6). Working from this basis, the researchers then projected the ozone depletion in the Arctic polar vortex up to the year 2100. The vortex, a relatively self-contained low-pressure system in the stratosphere at an altitude of 15 to 50 kilometres, forms over the Arctic every autumn and stays for varying durations throughout winter and spring. “For ozone to be depleted in the Arctic, the stratosphere must cool down considerably at the altitude where the ozone layer is,” says Peter von der Gathen, first author of the study. “Chlorine, which is normally bound in harmless substances, is released at low temperatures. Subsequently, chlorine together with bromine destroy ozone when exposed to sunlight. However, this only takes place when temperatures sink low enough during winter. Accordingly, in our study we estimated the ozone loss in the next few decades on the basis of the long-term temperature trend in the polar vortex and the expected decline in chlorine and bromine compounds.”

Despite the production ban issued in the 1987 Montreal Protocol, substances like chlorofluorocarbons (CFCs) and halons, which contain ozone-destroying chlorine and bromine atoms, are still abundant in the atmosphere, because they break down only very slowly. “The concentrations of these substances in the polar vortex continued to rise until the year 2000,” says Peter von der Gathen. “Since then, they’ve been on decline and are currently at roughly 90 percent of the maximum. Only by the end of the century they will have fallen below 50 percent, according to an assessment of the World Meteorological Organization. Since the pattern of warm and cold stratospheric winters in the polar vortex is very irregular, the degree of ozone depletion varies accordingly. Superimposed on this, however, our analysis of meteorological data from the past 56 years shows a significant trend toward lower temperatures in the cold stratospheric winters and associated increases in ozone losses. In addition, the analysis of the climate models clearly shows that this trend is part of climate change and therefore the product of global greenhouse-gas emissions.”

The complex underlying mechanism is at least partly understood: the same gases that result in global warming at the Earth’s surface (like CO2) also promote cooling of higher atmospheric layers in the stratosphere, where the ozone layer is located. “In addition, due to climate change we notice changes in the prevailing wind systems. We suppose that these changes also contribute to lower temperatures in the polar vortex. Up to now, the trend towards colder winters in the Arctic stratosphere was debated among researchers. Even when assuming such a trend it was believed that climate change would, in the worst case, prolong the recurring ozone depletion over the Arctic by a few years,” Peter von der Gathen explains. “By then at the latest – that’s what we assumed, too – the falling concentrations of CFCs would become such a dominating factor that the ozone loss would continually fade. But, according to our new calculations, things could also turn out very differently in the Arctic.”

The team’s analysis shows that the future chemical loss of ozone in the Arctic will greatly depend on the amount of greenhouse gases emitted by the end of the century. If emissions are substantially reduced in the coming decades, the study actually predicts an early and then steady decline in the degree of ozone loss; but for less optimistic scenarios characterised by rising greenhouse-gas emissions, the opposite could happen. “If we don’t reduce our greenhouse-gas emissions rapidly and decisively, loss of ozone in the Arctic stratosphere could, despite the great success of the Montreal Protocol, continue to worsen through the end of this century, instead of following the generally expected path towards a full recovery of the ozone layer” explains Markus Rex. “This represents a fundamental paradigm shift in our assessment of the future of the Arctic ozone layer. And the future of the Arctic ozone layer is relevant for life in Europe, North America and Asia: the Arctic polar vortex occasionally drifts south, which can lead to a few days with a reduced ozone layer over populated areas in spring, increasing levels of UV radiation and ultimately a greater risk of sunburn and acquiring skin cancer during these periods.”

For Markus Rex, the message from the Arctic is clear: “There are plenty of good reasons to quickly and comprehensively reduce greenhouse-gas emissions. Now we can add the risk of intensified ozone depletion over the Arctic to the list.”